Evidence of Russian Meddling in Election is Firm, US Intelligence Chiefs Say

Evidence of Russian Meddling in Election is Firm, US Intelligence Chiefs Say

The evidence is firm that Russia interfered with the November presidential election, America’s intelligence chiefs testified Thursday, but there is no way to tell whether the actions helped Donald Trump win.

“The Russians have a long history of interfering in elections, theirs and other people’s,” National Intelligence Director James Clapper told the Senate Armed Services Committee. “But we have never encountered such a direct campaign to interfere with the election process as we have seen in this case.”

Clapper said he could not know for sure whether the Russian leaks of sensitive information influenced the choices voters made on November 8. But he did say Russia did not interfere with the vote counting or the final result.

Many Democrats think the Russian hacking was specifically aimed at helping Trump win the White House over Hillary Clinton. Some Republican lawmakers say outside interference targeting any U.S. political party is a crime. 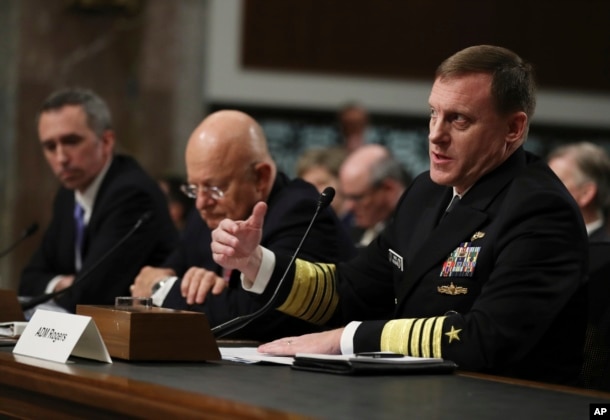 Clapper joined National Security Agency chief Mike Rogers and other senior U.S. officials Thursday in saying there was no way Moscow could have meddled in the election without the direct approval of “Russia’s senior-most officials.”

“We have invested billions and we have put people’s lives at risk to glean such information,” Clapper said. He told the senators an unclassified version of the top-secret report would be released next week.

“I think the public should know as much about this as possible, and so we’ll be as forthcoming as we can. But there are some sensitive and fragile sources and methods here,” Clapper said.

Trump, who has made no secret of his admiration of Russian President Vladimir Putin, has said he has serious doubts Russia was involved in the hacking. He plans to get an intelligence briefing Friday, but has not spoken highly of the U.S. intelligence community.

When asked about Trump, Clapper said he thought that policymakers should always have “healthy skepticism” about intelligence, “but I think there’s a difference between skepticism and disparagement.” Trump has repeatedly expressed doubt that Russia meddled in the vote, though he appeared to backtrack slightly Thursday morning, tweeting that he was a “big fan” of U.S. intelligence while taking a swipe at the “dishonest media” for misrepresenting his views.

“The dishonest media likes saying that I am in Agreement with [WikiLeaks founder] Julian Assange — wrong. I simply state what he states, it is for the people to make up their own minds as to the truth. The media lies to make it look like I am against ‘Intelligence’ when in fact I am a big fan!” Trump said in back-to-back tweets.

Clapper, during Thursday’s hearing, said he didn’t think Assange was a credible source, noting that the WikiLeaks founder had, in the past, put the lives of U.S. intelligence operatives at risk.

“I don’t think those of us in the intelligence community have a whole lot of respect for him,” said Clapper.

Late Thursday, The Washington Post reported that, according to U.S. intelligence, senior Russian government officials jubilantly celebrated Trump’s win and regarded it as a win for Moscow.

The Post said those Russian officials included some who might have had direct knowledge of the hacking.