Edible insects are often portrayed as something of a sustainable superfood – an environmentally friendly alternative to livestock. But who is already eating them and do they actually taste any good?

Two men cloaked in tarpaulin and tied to one another by a thick rope are engulfed in a swarm of hornets. They’ve been looking forward to this moment all day.

One lifts the lid from a large jar of clear liquor and deftly swats the attacking hornets into its opening, while the other takes a pickaxe and hacks at a near-vertical hillside to expose the many layers of their nest.

This moment, after two hours of trapping, baiting and chasing hornets through steep cedar forests in central Japan, brings the men a rush of satisfaction.

Returning home later that day, the men have hundreds of hornets swimming in liquor – and a 7kg (1st 1lb) nest.

Over bottles of beer, they pick the remaining hornets from the nest with tweezers, while their wives simmer the larvae – which taste like a gamey clotted cream when eaten raw, but like sweet mussels when cooked – with ginger, soy sauce, and mirin.

They fry any semi-adult hornets until their exoskeletons are crispy coverings for the soft meat within.

Neighbours drop by and toast their bounty with a glass of aged liquor made on a similar adventure, the hornet’s venom having turned the ordinary white alcohol into a dark, smoky brew.

As they enjoy the feast, they joke about how none of them will sleep much that night – hornets are considered a powerful aphrodisiac.

The world is filled with scenes such as these, of families and friends collecting and cooking edible insects, not out of desperation but because they are there and they taste good.

Take the famed tequila worm: more than a tourist gimmick, the range of species lurking in the golden bottles are a cherished food in parts of Mexico.

But if you want to find one, you must uproot and overturn a large, spike-riddled agave plant.

The red worms are especially prized: even raw they have a distinct smoky taste reminiscent of a very good mezcal.

They are in such demand that harvesting is strictly regulated, though visit a provincial Oaxacan market out of the official season and you may be approached with an offer of some illicit wriggling red worms.

The vast majority of edible insects, however, are easy to harvest, with many of them quite literally falling from the sky. Take termites, which are eaten across sub-Saharan Africa.

After the first rains, a flurry of the winged creatures rises like smoke from their mounds.

The next day, they cover the ground in their thousands.

Children are particularly keen collectors, since the process involves scrabbling around on all fours in the dirt before pulling the wings off each termite in turn

They are then boiled and sauteed with a little salt.

They are eaten mostly in rural areas, but can occasionally be found in urban markets, where they sell out quickly – and no wonder, for they taste like tiny pieces of crispy bacon.

Other edible insects grow on trees, in vast quantities.

Visit southern Burkina Faso in the rainy season, and you’ll find the trees stripped of their leaves and the ground covered in shea caterpillars.

Villagers wake as early as 02:00 to collect the juiciest specimens, which they cook into a stew for a hearty meal or fry as a snack. 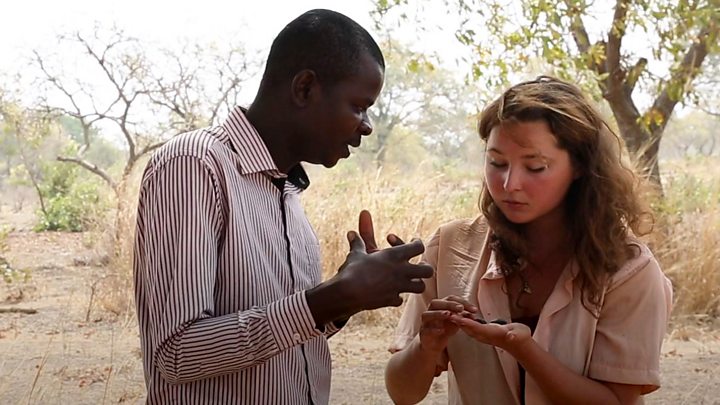 Others grow inside trees, such as palm weevil larvae.

These plump white grubs are popular in the Democratic Republic of Congo, where forest-dwellers take an axe to rotting palm trees to find the insects living inside.

The larvae are wrapped in leaves and cooked in an open fire.

Many of the most widely eaten insects worldwide are grasshoppers, crickets and locusts.

Why? Because we grow the plants that provide their preferred food in large concentrations.

In Asia, farmers trail nets through fields of rice to catch grasshoppers.

In Mexico, they sweep through fields of maize and alfalfa with large buckets for the very popular chapulines – the colloquial name for a pleasingly lemony species of grasshopper.

Locusts are mentioned in the Old Testament because they were and still are a common edible crop pest in the Fertile Crescent region of the Middle East.

Lighter than meat and heavier than seafood, they’re delicious.

Each one of these plant-loving insects absorbs the taste of your chosen seasoning and adds a satisfyingly crunchy texture.

Like other crops, most edible insects are highly seasonal, with many celebrations of the coming harvest held around the world – including wasp festivals in Japan and caterpillar festivals in Burkina Faso and the Democratic Republic of Congo.

So, while there’s been a lot of recent interest in farming insects for food, we’ve been doing it non-intensively for millennia.

The movement towards bringing edible insects to more dinner tables worldwide has been driven by the belief that eating insects could help boost nutrition and reduce pollution.

There has been interest in the possibility that bugs – already eaten by two billion people – may have a lighter environmental footprint than livestock.

Enthusiastic “ento-preneurs” – or bug businesses – are looking for new ways to appeal to the discerning consumer, with powdered insects now appearing in bread, pasta, and protein shakes.

It could be that such powder-pushing is what introduces more consumers to the pleasures of bug eating.

However, there remains a lot to be said for the joy and adventure that unapologetically insect-shaped delicacies can bring to the table.

Thai general in the spotlight over luxury watches collection