There is a vast amount of crowing in the media about Venezuela’s hyperinflation crisis—not because of the genuine suffering of millions of Venezuelans but as a handy stick to beat the left with.

I lived in Venezuela in 1995-96, two years before Hugo Chávez took power. At the time, inflation was 100 percent [the IMF estimates the 2018 inflation rate will hit 1,000,000 percent] and people rushed to the shops with their wages each month to beat the monthly price rises, clearing the shelves of essential goods. Venezuela is not new to economic crisis. 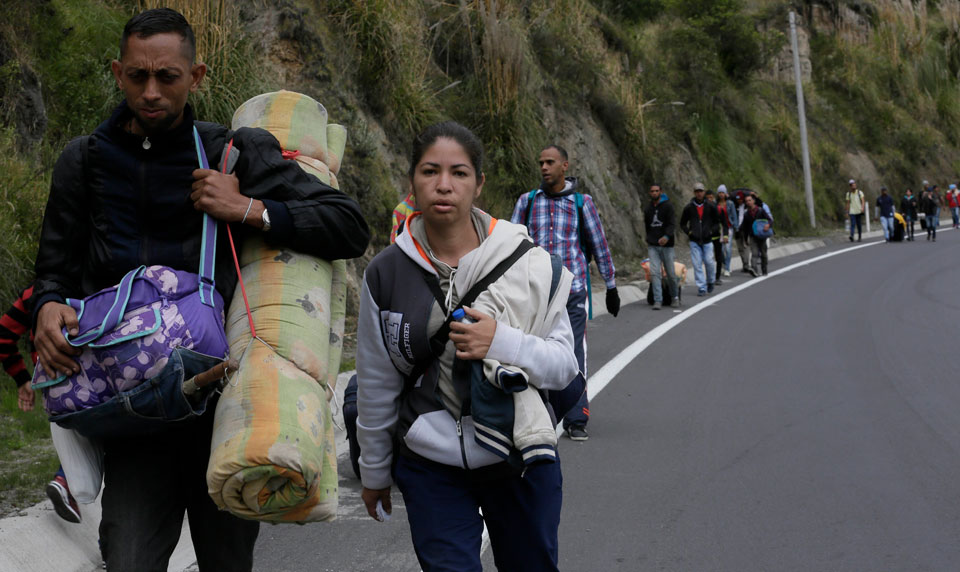 Venezuelans who do not have passports walk on the Pan-American Highway after crossing the Rumichaca International Bridge from Colombia, before reaching another migration check-point, in Ecuador (Photo: Dolores Ochoa / AP)

The current crisis is often described as the worst in Venezuela’s history and, with hundreds of thousands fleeing the country, that is hard to dispute. Whatever the achievements of the government of Chávez in terms of poverty reduction before his death in January 2013, his successor Nicolás Maduro has faced a crisis he seems unable to fix.

In fact, the problems of declining oil production, rising inflation, a massive brain drain, and collapsing real wages have only worsened.

Nevertheless, when I lived in Venezuela, it was a country that was very familiar with the ups and downs of oil dependency, the curse of oil in an economy otherwise lacking diversity. Corruption was endemic in both state and private sector.

Back in 1988, faced with a ballooning deficit caused by falling oil revenues, the government imposed an austerity program backed by the IMF. When bus ticket prices were raised, riots broke out and President Carlos Andrés Pérez sent troops onto the streets.

Up to 3,000 people were killed, many buried in mass graves. The Caracazo was the defining event that four years later saw leftist army officer Chávez attempt to seize power in a failed coup. After his release two years later, he began a steady march towards the presidency.

Several years after his 1998 election, the opposition launched a devastating business strike. In response, the government brought in currency controls to manage a rapidly declining bolivar. This is where some of the problems began that ultimately led to the current hyperinflation crisis.

By restricting access to dollars for importers and creating an artificial fixed exchange rate that was nothing like the real market rate for bolivars, the new system created an incentive to obtain import dollars for speculation. Why bother importing essential medicines or machinery when you can simply sell your fixed rate dollars on the black market for a huge profit?

For free market advocates, this policy, which led to the loss of billions of dollars in black market activity, is proof that socialist policies inevitably cause economic collapse.

While oil prices were high, the problems of government-subsidized goods being sold in Colombia in a massive cross-border trade and the illegal sale of dollars were masked, but, with the collapse of oil prices in 2014, the problems could no longer be hidden.

The crisis escalated, but the government did not change course or abandon the currency and price controls. The fear no doubt was that to do so would leave its working-class supporters exposed to a drastic loss of purchasing power and that the government would fall.

Critics said it was due to corruption, with those connected to the government enjoying wealth on the backs of the illicit dollar trade.

Likewise, Venezuela suffered severe economic crises in the past under capitalist management. The state’s high dependence on oil revenues increased under Chávez, thanks to the long oil boom of the 2000s. All attempts at diversification failed.

The smartest thing to do would have been to put a big chunk of oil revenues into a sovereign wealth fund along the lines of Norway’s model, which has given it a trillion-dollar treasure chest to fund its country’s high living standards.

But Venezuela faced tough challenges. Following a political strike by the state oil company’s management and staff in 2002-3, thousands were sacked and production went into gradual decline.

Despite this, revenues were used to fund a massive rise in spending on poorer Venezuelans, building three million homes for the poor and increasing access to health and education. However, no contingency plans were made for falling oil prices.

Venezuela’s government faced attacks from early on and they have rarely let up, including U.S. sanctions targeting essential imports including medicine and food since 2016. That doesn’t absolve the government of significant responsibility for the current crisis.

Maduro does not want to adopt the standard IMF policy of dollarization to get around the problem that the bolivar is near worthless, but, if he can’t find a way to restore confidence in the economy and its currency, the dollar will effectively become Venezuela’s currency anyway.

The recent currency conversion—which sees five zeros lopped off the end of every bolivar note—is an attempt to avoid that outcome.

As for the crowing critics, they could look to the other socialist governments in the region, including Bolivia, which is still growing strongly, and Ecuador, which likewise achieved massive poverty reduction under its left government. But of course, to do so would not fit the right-wing narrative that socialism always leads to poverty and hunger.

Of course, when millions flee poverty and violence under U.S.-backed governments, as they have done for years in Latin America, that’s never the fault of capitalism.

Indonesia’s currency is suffering, but that’s about to end, trade minister says