In January, Indonesia’s Partai Demokrasi Indonesia Perjuangan (PDIP), or the Indonesian Democratic Party of Struggle, made an announcement. Djarot Saiful Hidayat, the former governor of Jakarta and one of the most high-profile politicians in Indonesia, would run for governor of North Sumatra in elections to be held in June. To many, this news came as a surprise.

“Djarot did not decide to run in North Sumatra himself”, Jumiran Abdi, the PDIP deputy head in North Sumatra, told me in his office in Medan. “PDIP made the decision as a party. He was chosen due to his great popularity as a politician.”

Djarot is a well-known political figure in Indonesia whose profile has grown nationally in recent years. He was the mayor of Blitar, East Java, for a decade from 2000, and later one of the main campaign advisers in Joko ‘Jokowi’ Widodo’s successful 2014 presidential campaign. Djarot then became the deputy governor of Jakarta and governor for a short time, marking him as an accomplished and experienced politician.

Nothing Left in 2017 Jakarta Budget for Governor-Elect Anies

But Djarot’s record was blemished when he and Ahok, a Christian and Chinese-Indonesian, sought another term in the Jakarta gubernatorial elections last year, only to be defeated by Anies Baswedan and Sandiaga Uno. Perhaps at this point Djarot would have faded into political obscurity had it not been for Ahok’s subsequent trial and imprisonment for blasphemy. With Ahok incarcerated, Djarot became the governor of Jakarta from June to October, until Baswedan was sworn in.

Djarot’s rise to national fame followed widespread protests across the country against Ahok’s conviction. As crowds of more than a thousand people poured into the area in front of City Hall in Jakarta, Djarot wept openly while singing the Indonesian National Anthem, ‘Garuda Pancasila’, and ‘Rayuan Pulau Kelapa’ – odes to Indonesia’s principles of democracy, diversity, and unity. Many had wondered if Djarot, a devout Muslim, would distance himself from Ahok following his conviction for insulting Islam, but this gutsy move endeared him to many political observers and voters alike. Djarot’s popularity underpinds PDIP hopes to propel him to the governorship of North Sumatra. 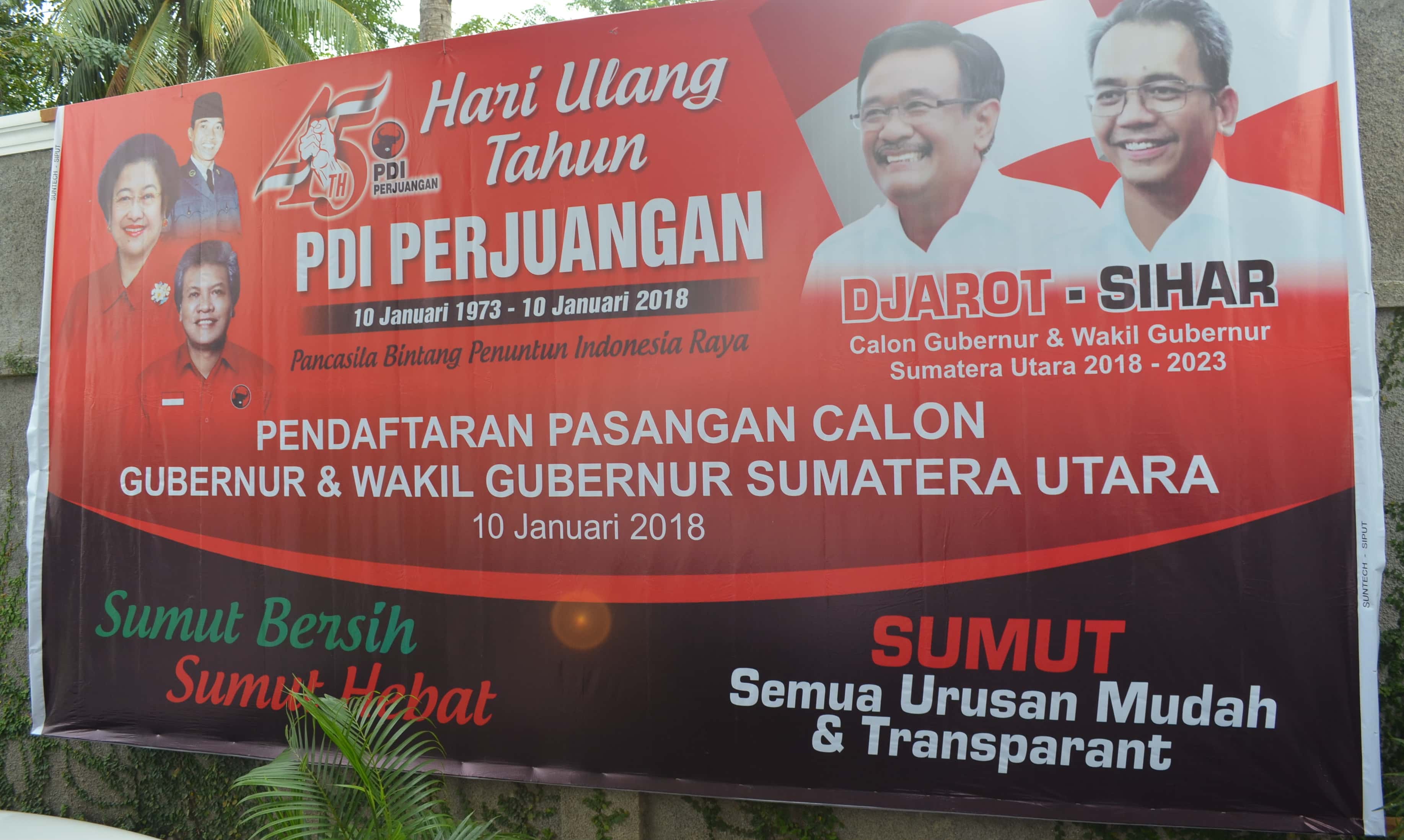 North Sumatra is Indonesia’s fourth most populous province, which makes it an important political power. It is also one of the most multicultural provinces in the country, with a mixed population of Batak, Javanese, Chinese, Tamil, Minang, and Melayu residents.

Djarot could appeal to a wide cross section of voters, and part of his electability will depend on a numbers game. Indonesian voters often tend to choose candidates of the same ethnicity and religion as themselves. Djarot is Javanese, as are about 30% of North Sumatran residents. His support for Ahok could mean that he receives widespread support from Chinese voters, who account for around 6% of the population. Djarot’s running mate, Sihar Sitorus, is Batak and also a Christian, and a smart choice for deputy in an effort to pick up Christian and Batak voters.

In other South East Asian countries, a candidate’s origin and religion wouldn’t matter as much, but as the Jakarta gubernatorial race showed, identity is being used more and more in election campaigns in Indonesia. But according to Kardina Karim Hamado, a lecturer in politics and international relations at Fajar University, Djarot’s chances in North Sumatra could be better than in Jakarta:

If you compare politics in the context of religion in both places, North Sumatra is a little different as there are large Muslim and non-Muslim communities … Sumatran voters are known to be more accommodating to candidates from outside North Sumatra. They have previously elected governors in North Sumatra who were not local residents.

Djarot’s main opponent, former lieutenant general Edy Rahmayadi, was born in Sabang in Aceh. Some communities in North Sumatra, particularly non-Muslim groups, could worry that he may try to enforce more conservative policies on North Sumatra in the model of Aceh, the only part of Indonesia that has Shariah law. Rahmayadi also has a controversial record following a dispute over land rights, which saw forced evictions of residents from Deli Serdang and could make him unattractive to some voters. Yet Rahmayadi remains a formidable candidate supported by four political parties: Gerindra, Hanura, Partai Amanat Nasional (PAN), and Partai Keadilan Sejahtera (PKS).

Another stumbling block for Djarot and Sihar will be having to start their campaign from scratch. They are newcomers to the political scene in North Sumatra and will need to demonstrate that they understand the ethnic and religious complexities of the region, which is something Djarot has already started to address. In one of his first official appearances in Medan, Djarot said he was ready to serve all the residents of North Sumatra, telling an appreciative crowd at Sobat Cafe, “We are here to serve the Karo, the Mandailing, the Toba, the Indians, the Chinese, the Javanese … everyone”.

In this sense, PDIP is organising a cohesive campaign based on inclusivity. While Djarot may appeal to Javanese and Chinese-Indonesian voters, he cannot rely on those votes alone if he wants to win. He needs to position himself as a man who can represent all the religious and ethnic groups across North Sumatra without bias. This inclusive message of governing in everyone’s best interests could in turn convince undecided voters to support a political outsider of a different religion or ethnicity to themselves.

The PDIP’s end strategy might be to pitch Djarot as the “everyman” candidate in the race. At least, they would do well to keep reminding voters of something that the PDIP’s Abdi already appears to recognise: “North Sumatra is like a mini-Indonesia. Everyone is welcome here and that includes Djarot.”

A Guide to Navigating the 2018 Risk Landscape in Indonesia

A Guide to Navigating the 2018 Risk Landscape in Indonesia