JAKARTA — A sweeping package of deregulation aimed at boosting Indonesia’s economy will be far more harmful than initially feared as it threatens to revive the centralized power structure of the country’s authoritarian era, environmental experts say.

The administration of President Joko Widodo has prepared two bills containing more than 1,000 proposed amendments to at least 79 existing laws, which it says it expects parliament to pass within the next few months.

The so-called omnibus bills have been in the works since last year, and though not officially published, details have emerged that prompted warnings from experts and activists about the potential for ushering in greater environmental damage and conflicts over land and resources.

On Feb. 12, the government submitted one of the two omnibus bills, focused on job creation, to parliament, officially kicking off the deliberation process; on Feb. 15, it published an official draft for the first time. The draft, running more than 1,000 pages, has caught observers by surprise, as it contains numerous provisions that have far more dire environmental implications than previously feared.

Chief among these is a concentration of power with the central government to issue the permits required for exploitation of natural resources.

Under the bill, regional administrations would have their power to manage forests and the environment revoked, making the central government the only authority on spatial planning and land and forest management.

This would effectively reverse the decentralization wave that started in 1999 to devolve power to local authorities from the pre-1998 dictatorship known as the New Order.

Raynaldo Sembiring, the executive director of the Indonesian Center for Environmental Law (ICEL), said he had no idea that this power grab by the central government would be included in the bill.

“We’re surprised that the authority over environmental and natural resources issues is being centralized,” he told Mongabay. “I thought this only applied to the approval of environmental permits, but apparently it will also apply to plantation, mining and electricity generation permits. They will all come under the authority of the central government.”

The change, if it passes, will be significant. At present, provincial and district governments have the authority to allow mining, logging, agriculture and other projects in their jurisdictions with a potential impact on the environment. The rationale behind decentralization, which is enshrined in law, is that local officials understand the needs and challenges of their respective areas better than the bureaucrats in the capital; and also to dismantle the decades of crony corruption that had allowed the governing class in Jakarta to farm out contracts for lucrative projects to family members and associates.

Reversing decentralization threatens to revive that power structure, Raynaldo said. “There’s a massive centralization [of power], and it’s being done in a way that breaks many existing regulations, such as the law on regional administration,” he said. “It’s like we’re going back to the New Order.” 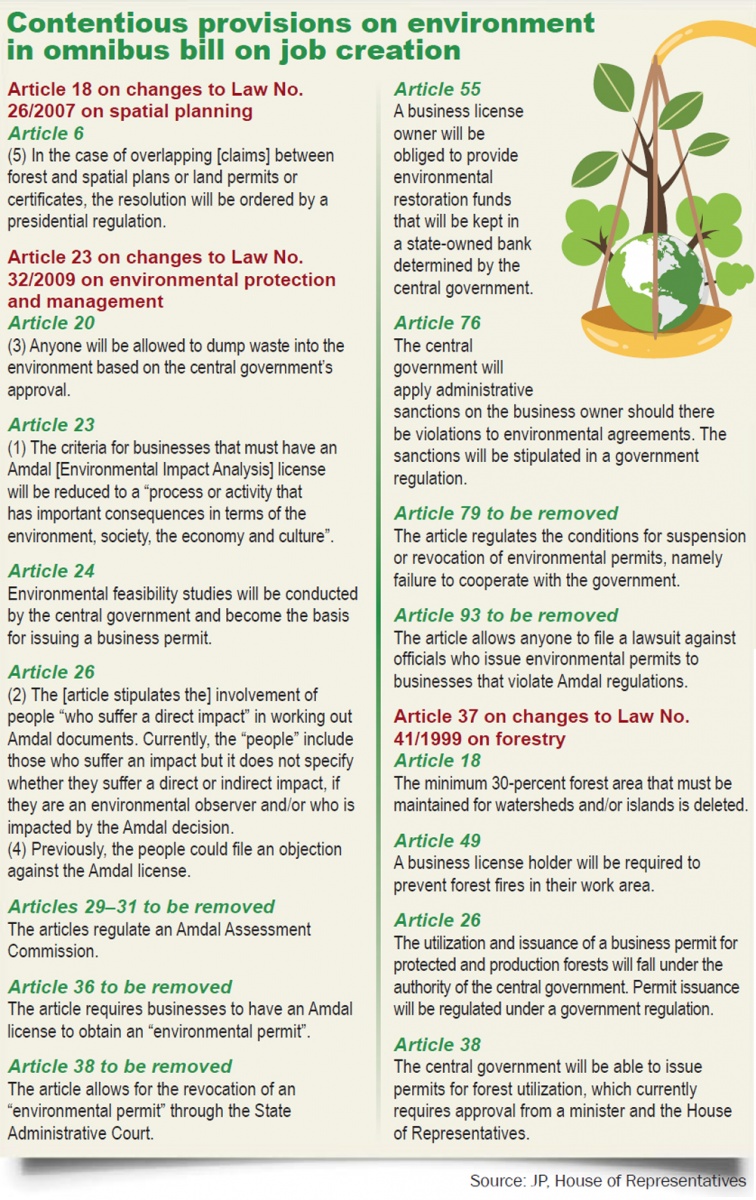 One of the controversial provisions in the bill would give the central government the power, through presidential decree, to revoke regulations issued by local governments. The government had previously attempted to exercise this power through ministerial decree, revoking more than 3,000 local regulations in 2016; but the move was ruled unconstitutional by the nation’s highest court.

That ruling hinged on an existing provision allowing the central government to quash locally issued regulations only if they were deemed in contravention of “higher laws, the public interest, and/or the public sense of morality.”

The provision in the new bill omits those latter two requirements, effectively allowing the president to revoke local regulations considered to conflict with national laws and regulations — a low threshold, given how loosely many laws in Indonesia can be interpreted.

The bill also ensures there’s no repeat of the 2016 incident — when local governments challenged the mass revocation in court — by scrapping the existing provision allowing them to appeal against revocations. The proposal has been welcomed by the business lobby.

“This will harmonize government regulations and regional bylaws to ease the investment process,” Raden Pardede, a deputy chairman of the Indonesian Chambers of Commerce and Industry (Kadin), said as quoted by The Jakarta Post. “We are hoping that regional administrations will support the policy to attract and expedite investments.”

Local leaders have already warned of a worrying authoritarian bent by the Widodo administration in seeking to undermine their power. Bima Arya, the mayor of Bogor, a city on the southern outskirts of Jakarta, said losing the power to require businesses to obtain building permits, for instance, could pave the way for environmental disasters. Bogor in particular is vulnerable: for decades local authorities have struggled to control the unfettered development of watershed areas, which has exacerbated the risk of landslides there and flooding downstream in Jakarta.

“We local heads are confused: How can we control naughty developers?” Bima said. “They already have a dangerous tendency to take shortcuts.”

The problem with the central government seizing full authority to determine the management of the country’s natural resources is that it might not have the capacity to do so, said Raynaldo from ICEL. He cited the sheer size of the country and the number of permits that have to be monitored for compliance.

Critics say there are already signs that environmental issues will be sidelined for the sake of attracting investment. In a recent interview with BBC, President Widodo said his top priority was to boost economic growth, and that while issues such as the environment and human rights were important, he preferred to focus on one thing at a time.

“Maybe after that [developing the economy], then the environment [will be my priority], innovation and then human rights. Why not?” he said. “[But] not all can be done [at the same time]. It’s not that [I] don’t want to, but I like to be focused on working.”

Other worrisome provisions that observers have identified in the bill are those that weaken enforcement against environmental violations.

One of these is the scrapping of the environment ministry’s power to go after environmental violators that local governments don’t pursue. It’s a concept known as second-line law enforcement that was introduced in the 2009 law on environmental protection.

“In many cases at the local level, the Ministry of Environment and Forestry often uses this authority to crack down on naughty companies,” Raynaldo said.

Another proposed change would allow companies to evade responsibility for fires on their concessions. At present, concession holders are responsible for any fires that occur on their land, regardless of whether or not they can be proven to have started the fires. The concept has been employed successfully to prosecute a number of companies since 2015, when fires razed 2.6 million hectares (6.4 million acres) of land — an area larger than the U.S. state of Vermont.

By scaling back this measure of liability and only going after companies if they can be shown to have started the fires, the bill will allow for unscrupulous concession holders to cheat the system, Raynaldo said. This could give rise to even more fires, as companies will be able to deny responsibility and not face any charges.

Bambang Hero Saharjo, a forensics expert who has testified in at least 500 prosecutions of companies accused of fires on their land, said the change would make it more difficult to prosecute violators. This includes ongoing efforts by the environment ministry to prosecute five companies for fires in 2019.

“Proving that there’s been a violation of the law [in the case of a fire] is very difficult,” he told Mongabay. “We will have to prove where the fires started and how the fires [spread].”

Bambang also noted that the move to abandon full liability played right into the hands of the palm oil and pulpwood industries. Lawyers for the industries say it’s unfair that the companies should be held accountable for fires started by others, and in 2017 sought to challenge the constitutionality of the comprehensive liability concept. Within days of filing the lawsuit, however, they withdrew it, saying they needed more time to study the issue.

“A few years ago, they challenged this concept but then backed off,” Bambang said. “But now it’s the government itself that wants to scrap it. This will raise questions.”

The plantation companies have also long sought to abolish a rule allowing small farmers to use fires to clear land for planting, in keeping with customary and indigenous traditions. The new bill would outlaw the practice.

Environment and Forestry Minister Siti Nurbaya, meanwhile, said that the omnibus bill was aimed to protect citizens, and thus would not lead to the criminalization of them.

“No ordinary citizen will be punished for making a living from the forest,” she said as quoted by The Jakarta Post.

It also proposes weaker punishments for those concession holders found guilty of fires on their land. At present, company executives face charges ranging from criminal neglect to arson; under the bill, the companies only risk administrative sanctions, according to Zenzi Suhadi, the head of advocacy at the Indonesian Forum for the Environment (Walhi).

“As a result, there’ll be more corporate crimes that can’t be prosecuted,” Zenzi said. “This change in stipulation is a signal that the government will compromise with companies because criminal [punishment] will depend on steps [taken by] the government.”

Raynaldo said it was clear the omnibus bill had been thrown together without much thought or scientific rationale by the government.

“I think there’s been a major violation in the theory and rule of lawmaking here,” he said. “We’re sending a message to our law students that lawmaking doesn’t need to be based in theory. It can be done arbitrarily.”

Where Does Hong Kong’s Protest Stand Amid Coronavirus?

Where Does Hong Kong’s Protest Stand Amid Coronavirus?