The death toll from violent protests in Indonesia’s restive Papua province has risen to 32 after several bodies were found under burned buildings, officials said Tuesday. An angry mob torched local government buildings, shops and homes and set fire to cars and motorbikes in Papua province’s Wamena city on Monday in a protest by hundreds of people sparked by rumors that a teacher had insulted an indigenous student.

Papua police spokesman Ahmad Musthofa Kamal said Tuesday that 12 more bodies were found in and around the burned-out wreckage of buildings engulfed in the fires set by rioters. Seventy-two other people were hospitalized, many with burns or head injuries.

He said the number killed is expected to rise as authorities search through affected areas in Wamena. National Police spokesman Dedi Prasetyo said earlier that police were questioning 733 university students involved in another protest in Jayapura that left one soldier and three civilians dead.

Why is West Papua in Constant Turmoil?

Kamal said police have named five students as suspects accused of assaulting the officers. They could face 5 1/2 years in jail if found guilty. Police have been releasing the other students. Police also arrested two men suspected of orchestrating the violent protests, Kamal said.

He said about 5,000 people fled to temporary shelters at local police and military headquarters in Wamena after their homes were burned in the riots. The students were among those studying in other Indonesian provinces who returned home during previous protests last month. Those protests were triggered by videos circulated on the internet showing security forces calling Papuan students “monkeys” and “dogs” in East Java’s Surabaya city when they stormed a dormitory where Papuan students were staying after a torn Indonesian flag was found in a sewer.

The students had forced a local state university to accommodate them, and their protest turned violent on Monday as a mob of angry students attacked a soldier and several police officers with machetes and rocks, resulting in security forces responding with gunfire, killing three civilians. The soldier died on the way to a hospital. At least five police officers were in critical condition.

National Police Chief Tito Karnavian told a news conference Tuesday in the capital, Jakarta, that most of victims in Wamena were non-indigenous Papuan people. He said the situation was brought under control on Tuesday after more police and soldiers were deployed to restore security in the region. 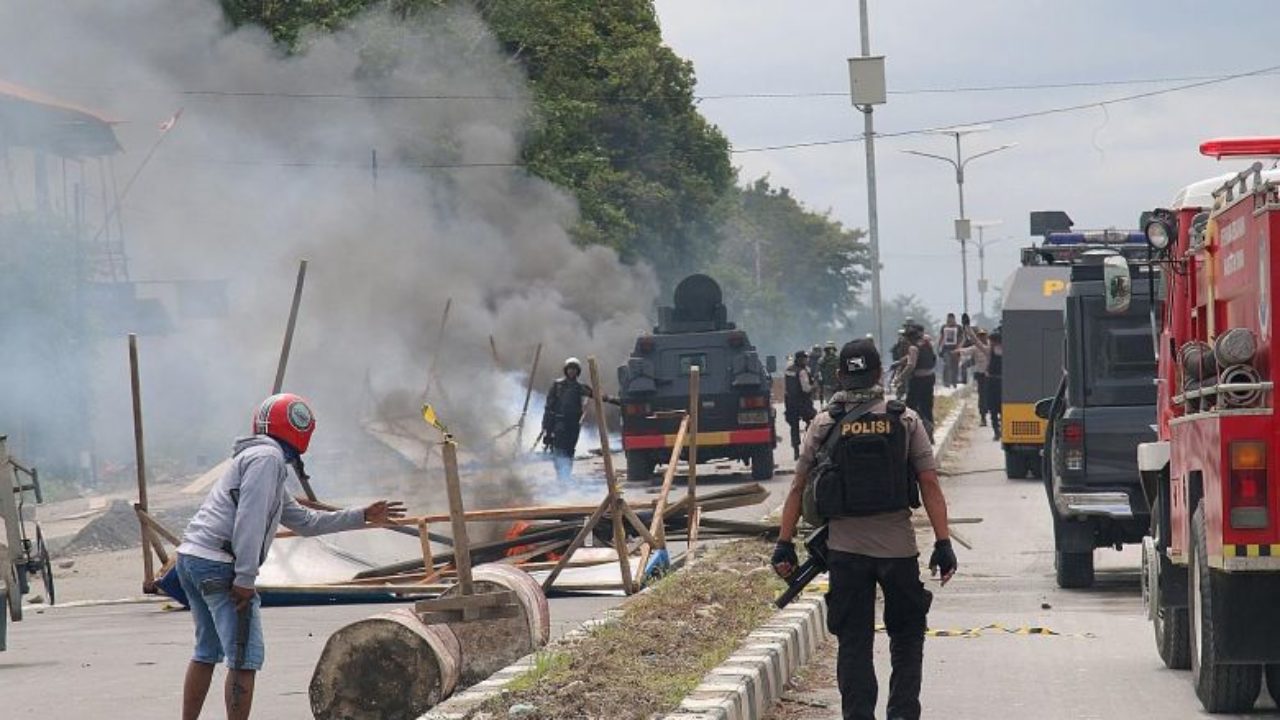 He accused separatist leader Benny Wenda of orchestrating the previous unrest in Papua and West Papua provinces ahead of a U.N. Human Rights Council meeting on Sept. 9 and the annual U.N. General Assembly on Monday, to draw international attention to Papua.

Wenda, who has been living in exile in Britain for years, is known as the leader of the United Liberation Movement for West Papua, a political wing of the Free Papua Movement in exile.

Sebby Sambom, spokesman for the West Papua National Liberation Army, the military wing of the Free Papua Movement, denied Indonesian accusations that it was involved in the violent protests.

“We have not taken a stand in this people’s protest over racism against indigenous Papuans,” he said in a statement. “This is purely an action carried out by the entire society.”

During Tuesday’s news conference, Indonesia’s coordinating minister for politics, law and security alleged that separatist groups were trying to foment conflict by exposing a mistake made by security forces that does not represent most Indonesian’s attitudes or behavior.

Conflicts between indigenous Papuans and Indonesian security forces are common in the mineral-rich but impoverished Papua region, a former Dutch colony in the western part of New Guinea that is ethnically and culturally distinct from much of Indonesia.

The region was incorporated into Indonesia in 1969 after a U.N.-sponsored ballot that was widely seen as a sham. Since then, a low-level insurgency has simmered in the region, which is divided into two provinces, Papua and West Papua.

In recent years, some Papua students, including some who study in other provinces, have become vocal in calling for self-determination for their region.