The White House’s decision this week to repeal the Deferred Action for Childhood Arrivals (DACA), carries enormous repercussions for the nearly 800,000 beneficiaries: The undocumented young people who were brought to the United States as children.

But the cost, which is difficult to quantify for a workforce faced with the real possibility of losing their job and forced to leave the country, is evident to employers, who largely view both the moral and economic implications of ending the program as intertwined.

“Losing [the economic contributions of DACA recipients] is a direct cost,” said Kathryn Wylde, president and CEO of Partnership for New York City, which represents the city’s business leadership. She said the state’s DACA workforce contributes several billion dollars a year to the local economy.

“It’s also a signal to the rest of the world that somehow America is no longer a place that is embracing talent and hard work and the energy of immigrants,” Wylde told VOA. “That message has a ripple effect in terms of hurting recruitment efforts by our major companies, because they need talent — multilingual talent — from all over the world.”

To date, more than 400 U.S. entrepreneur and business leaders have signed an open letter that calls on U.S. President Donald Trump and Congress to preserve DACA and provide a permanent solution that ensures recipients’ ability to continue working legally in the country without risk of deportation.

“Our economy would lose $460.3 billion from the national GDP and $24.6 billion in Social Security and Medicare tax contributions,” the letter reads, referencing research conducted by the liberal-leaning Center for American Progress, over a 10-year period.

The conservative-leaning CATO Institute places that figure at $280 billion. 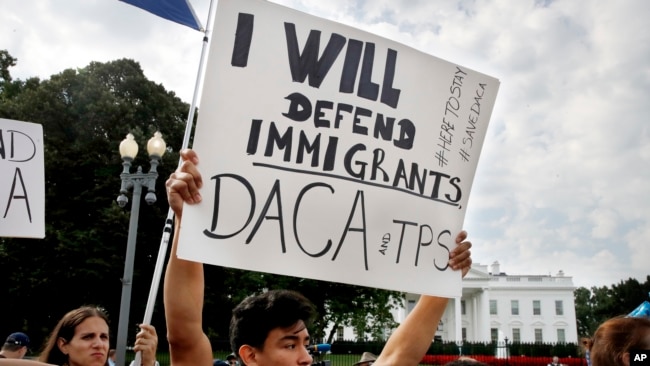 Diego Rios, 23, of Rockville, Md., rallies in support of the Deferred Action for Childhood Arrivals program outside of the White House, in Washington, Sept. 5, 2017.

Following the announcement of DACA’s repeal, the White House suggested unemployed American workers might somehow benefit, based solely on the age of the workforce.

“There are over 4 million unemployed Americans in the same age group as those that are DACA recipients,” White House Press Secretary Sarah Huckabee Sanders told reporters.

But economists and immigration analysts find fault with Sanders’ argument: The native-born unemployed population is not a perfect substitute for the DACA workforce, and the displacement of one worker for another does not increase productivity.

Under the repeal of DACA, CATO estimated employers would incur $6.3 billion in turnover costs, a figure that includes the recruiting, hiring and training of 720,000 new employees in often highly skilled positions. Thirty-six percent of DACA recipients 25 and older hold a bachelor’s or advanced degree.

Many DACA recipients “are highly educated and working in positions such as health care and education, where they are more highly paid and therefore more productive,” said David Bier, immigration policy analyst at CATO Institute. “[Those are] the industries where you’re going to see a greater impact as a result of this forced turnover caused by the DACA repeal.”

“Contracting the labor force, kicking people out of the country, will not create jobs. It will just shrink the overall size of the economy,” Bier said.

Over the long term, Wylde said, failing to find a permanent solution for DACA workers would inhibit U.S. businesses’ ability to compete.

“We want to be at the forefront of the attraction and support of our talent,” she said. “We don’t want to be deporting them.”