BTS’ army of admirers: Inside one of the world’s most powerful fandoms

BTS’ army of admirers: Inside one of the world’s most powerful fandoms

Post Views: 102
When the latest album from the South Korean boy band came out in April, she bought the CD, even though she doesn’t own a CD player. When the seven-member group went to the United States in May, she went to all six of their concerts. And when BTS’ single “A Brand New Day” came out in June, she streamed it constantly for a full day.
Quinde, a 24-year-old graphic design student from New York City, is one of a legion of fans who spend plenty of time and money to support their idols.
Known as ARMY (Adorable Representative MC for Youth), BTS’ global fan base of millions of loyal followers is powerful enough to create major waves — and help the group smash music industry records.
Some ARMY, like Quinde, listen to songs over and over to boost BTS’ statistics on YouTube and music streaming sites.
They’ve helped BTS break global records for engagement on Twitter. They’ve banded together for good causes, such as raising money and planting trees in BTS’ honor. They’ve even bought a billboard in New York’s Times Square.
And — most significantly for BTS fans — they’ve contributed to making the group one of the biggest boy bands in the world.
But who are BTS ARMY — and why are they so dedicated?

Being ARMY is easy: you just need to like BTS.
Since the start, BTS have courted ARMY online. Without the connections and financial backing of the major labels, BTS’ agency Big Hit Entertainment had to rely on social media.
That created a kind of intimacy with fans, adding to their popularity. On Twitter, BTS now have the biggest following of any K-pop group.
The most hardcore fans can pay about $30 to get an official membership, including access to early concert tickets and handwritten birthday wishes from BTS. But if a member violates official membership guidelines — such as intentionally boarding the same plane as the band — they could find their membership rescinded.
It’s not all fun and games, though. Being a dedicated member of BTS ARMY — whether officially or unofficially — can mean a lot of work.
On top of her three part-time jobs, official ARMY member Quinde used to run a fan base website.
Every day, she spent hours chatting with fellow fans on messaging app Slack, planning everything from the hashtag for singer Jin’s upcoming birthday, to how fans could help get BTS a Grammy.
Running the fan base was “amazing,” but it was also tiring work, Quinde said. She’s now taking a break from the demands of fandom as she feels that others are supporting them too. “I can kind of rest assured,” she said. “They’re in good hands.”

The power of streaming

For many ARMY, their self-assumed responsibilities are simple: stream the band’s songs and videos as many times as possible so their idols stay at the top of the music charts.
Ahead of an album or single launch date, the South Korean arm K-ARMY divide and conquer, releasing lists of songs that must be streamed endlessly. Dedicated ARMY members source phones from their friends and family members, and log into multiple accounts to optimize their streaming abilities. 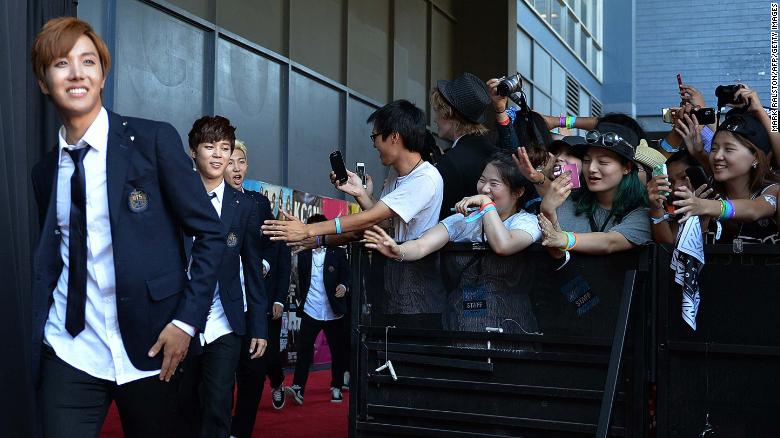 Members of Korean K-pop group BTS arrive on the red carpet during the K-CON 2014 at the Los Angeles Memorial Sports Arena on August 10, 2014.
Whenever BTS released an album, 22-year-old Lee Siwon posted a status on messaging platform KaKao Talk, a popular chat site in South Korea, saying that she was unable to call or check messages because she would be busy streaming BTS’ songs over and over.
“I’ve activated all my old phones and the ones in my family to stream songs,” said Lee, a 22-year-old member of K-ARMY. “I felt like BTS and I were inseparable, so that made me try harder for their success.”
Park Semi, who has been a K-ARMY since 2016, has been playing the music video for “Boy with Luv” every day for the past five months. Most of the time, she hasn’t even been watching it — it’s all about getting more views on YouTube. 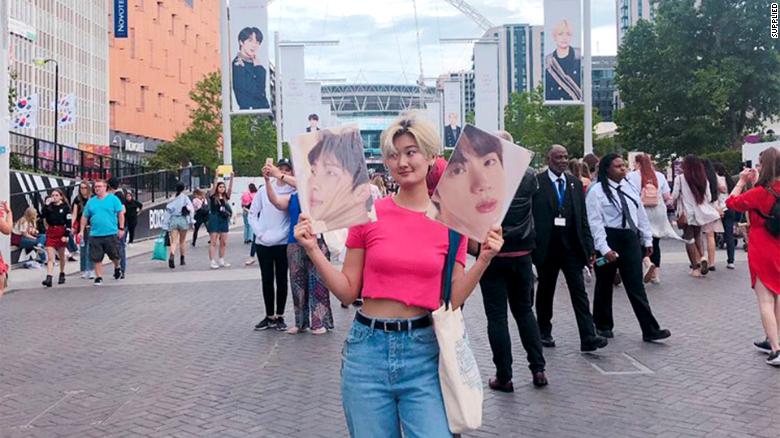 Lee Siwon at Wembley Stadium in the United Kingdom.
“I think everyone who is a regular member of the K-ARMY will be doing the same,” she said.
Among fellow K-ARMY, a screenshot of the number of streams you rack up is considered a badge of honor, proof of how hardcore a fan you are. Park herself has done it: “I have streamed earlier songs of BTS over 20,000 times.”

The efforts of ARMY like Park and Lee have paid off.
BTS has won the Billboard Music Award for Top Social Artist three years in a row. The group’s latest record, “Map of the Soul: Persona,” recently became the best-selling album of all time in South Korea, with more than 3.3 million copies sold. And one of the songs on the album, “Boy with Luv,” holds the record for the most YouTube views within 24 hours (74.6 million).
But none of this was done at the behest of BTS’ management, Big Hit Entertainment. Big Hit have courted fans with their social media strategy and have simplified the process of becoming an official ARMY, but they don’t mandate constant streaming.
Nevertheless, Big Hit does have some input. Ahead of shows in South Korea, the agency approves the messages and phrases that fans write on their banners and placards.
Even during South Korean concerts, there are strict rules. Fans aren’t allowed to sing — concertgoers want to hear the band, not the crowd. However, they are allowed to participate in chants signed off by Big Hit at prearranged times during the show.
After the crowd started singing at BTS’ recent show at Wembley in London, South Korean ARMY complained that BTS had shown favoritism toward foreign fans by allowing them to sing.
“(The fans) even got up from their seats while the concert was still on and got snacks — unthinkable behavior back in South Korea,” said Lee, who was at the Wembley concert. 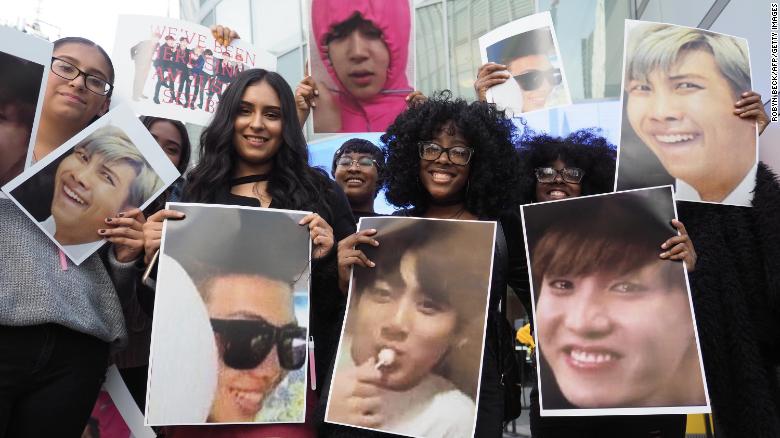 Fans of the Korean boy band group BTS pose with photos of their idols outside the 2017 American Music Awards, November 19, 2017 in Los Angeles, California.

An ARMY of workers

In the past few years, some of BTS’ international followers began to harness the hysteria for good.
BTS fan Erica Overton, a Brooklyn native in her late 30s, was “entranced by the power of fandom,” and wondered if it could be redirected towards something more substantial than YouTube hits or a New York billboard.
In March last year, she founded One in an Army, a Twitter-based group that pools donations from BTS fans to spend on charity projects. Members are based in the US, Canada, Sweden, Malaysia and China. There’s even one member in Saudi Arabia, Overton said. 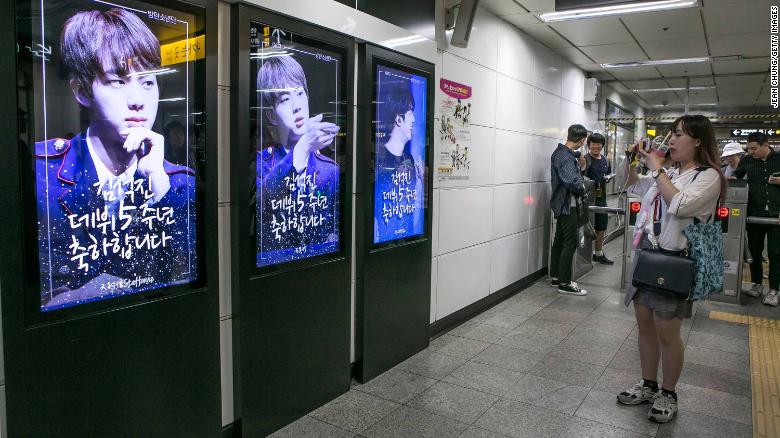 A fan takes pictures of photos of BTS singer Jin which are displayed at Hongdae Subway Station on June 2, 2018 in Seoul, South Korea. Fans bought the advertising space to celebrate Jin’s 5th anniversary of his debut with BTS.
In one of their earliest projects, the group raised money for non-governmental organization Thirst Relief that provides clean water for families in Tanzania. Overton said fans raised enough to buy 30 water filters for provide clean water to about 300 people for the next 25 years.
Supporting projects to help those in need is a natural extension of being a BTS fan, Overton said.
“They put a lot of effort into giving us of themselves and their music and their sincerity … the ARMY really wants to give back in their name.”

When the wave turns

But while ARMY devotion can be used for good, it can also take on negative undercurrents.
Some ARMY are highly sensitive to a possible slight — and numerous public figures have borne the brunt of ARMY’s anger.
For instance, when an Australian television presenter in June introduced BTS as “the biggest band you’ve never heard of,” ARMY immediately took action on social media to accuse the network of “racism and xenophobia.” Ultimately, the network issued an apology. 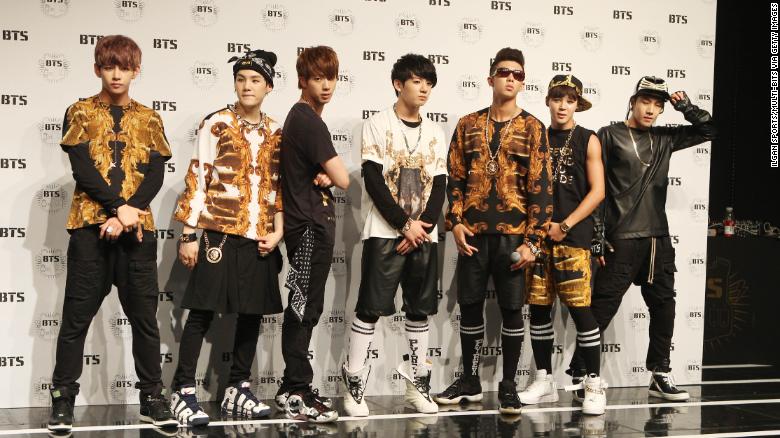 What powers a fandom

Since they debuted in 2013, there’s been a symbiotic relationship between BTS and ARMY.
Because Big Hit weren’t one of the top three K-pop labels, they were seen as an underdog and relied on social media. That drew in fans — and as fans tuned into their music and video clips, they found that BTS created elaborate stories with their music videos and sang about social issues.
Those videos give fans a lot of fodder to “pore over and try to decode,” making the BTS fandom not so different from the dedicated followers of the “Lost” television series, said Michelle Cho, a professor at the East Asian studies department at the University of Toronto.
To BTS, the fans are a major reason behind their success. As a result, barely a concert or awards ceremony goes by without BTS thanking ARMY for helping them get where they are.
Cho says this idea of reciprocity sets BTS apart from pop groups in the West.
“I think it’s a really potent mix,” she said. “You’re not just a casual fan of BTS, you have to be initiated into their world and then you get sucked in.” 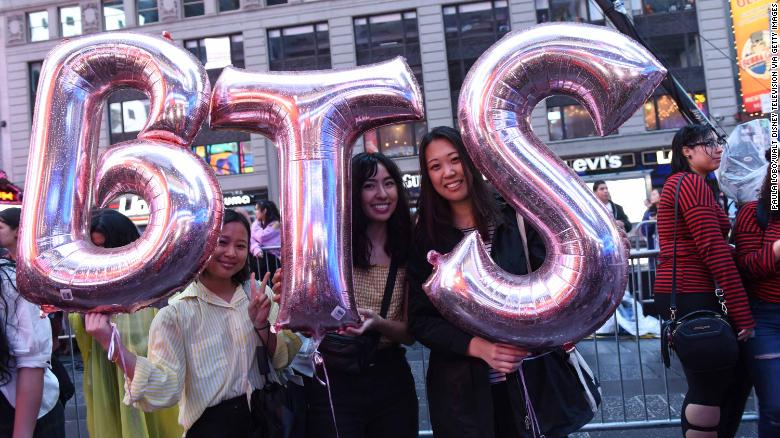 Fans ouside Times Square Studios on September 26, 2018, where BTS was set to perform.
That was true for Tahne Howard, a 18-year-old student from the United Kingdom, who got so drawn in to BTS that she began having dreams about them. She finds comfort in their message of “love yourself” — and leaves comments on their online live streams, hoping that they’ll notice she exists.
She doesn’t see BTS as gods — but it’s still personal.
“It’s like proud parents watching their children grow up,” said Howard. “We helped them to be who they are now, and thankfully, the band is grateful for what we do.”
Source :
cnn
Tags: ArmyBTSK-popnewsSouth Korea
Previous Post