Azeri Dissident, Snatched in Tbilisi, Turns Up in Baku

Azeri Dissident, Snatched in Tbilisi, Turns Up in Baku

A prominent Azeri dissident and journalist who was kidnapped near his home in the capital of Georgia has turned up in custody in Baku, Azerbaijan, less than 24 hours after he disappeared.

Efqan Muxtarli has been charged with illegally crossing the border from Georgia into Azerbaijan and smuggling 10,000 euros in cash, his attorney told VOA Tuesday. Known for years as a fierce critic of Azerbaijan’s President Ilham Aliyev, Muxtarli presumably could face other charges in his homeland related to his dissident activities.

Human-rights advocates have called for immediate action to investigate Muxtarli’s apparent abduction, but Georgian government officials have provided no information about the dissident, who is said to suffer from diabetes. 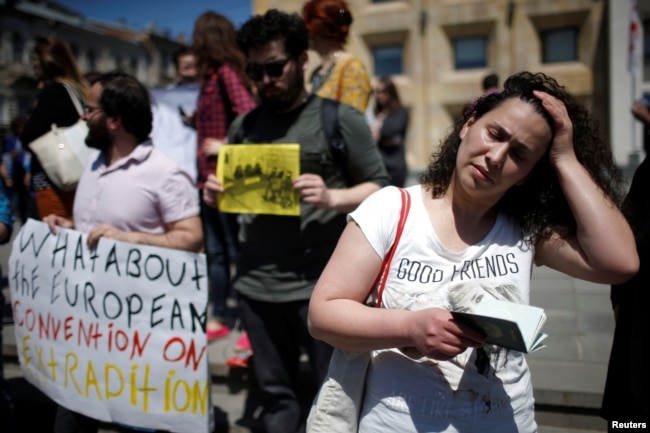 Leyla Mustafayeva, wife of Azerbaijani journalist Efqan Mukhtarli attends a rally in support of her husband in Tbilisi, Georgia, May 31, 2017.

Muxtarli telephoned his wife at about 6 p.m. Monday and said he would be home in 15 minutes, she said. He never appeared, and his cellphone was turned off. His fate was unknown until an attorney in Baku, Elchin Sadigov, said Tuesday he had met with Muxtarli in the Azeri capital.

Sadigov told VOA’s Azeri Service Muxtarli gave him a dramatic account of his abduction, which began when unidentified men grabbed him on a street in Tbilisi:

“They used force to put him in the back of a car, tied him up, put him in a sack and beat him,” Sagidov said. The journey continued for some time, but the kidnappers changed cars at least twice.

“The people in the last car spoke Azerbaijani,” the lawyer continued, recounting his conversation with Muxtarli. “When he was taken out of the car, he found himself at the border,” where he was told he faced trespassing and smuggling charges. Sadigov said the smuggled cash had been put in Muxtarli’s pants pocket before he was turned over to Azeri authorities.

The dissident’s wife, Leyla Mustafayeva, told VOA’s Georgian Service her husband clearly had been targeted for his “professional activities.” 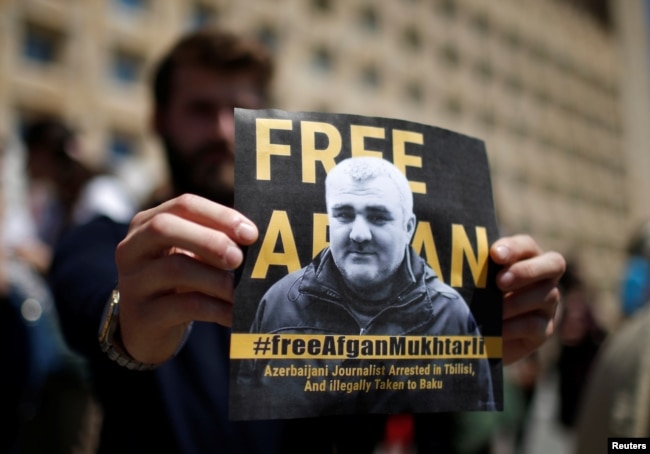 A man attends a rally to support Azerbaijani journalist Efqan Mukhtarli, who was abducted in Tbilisi on May 29 and now is in detention in Baku, in Tbilisi, Georgia, May 31, 2017.

She also noted how ironic it was that he was charged with illegally crossing an international border at a time when he had no passport with him. It had been left at his home in Tbilisi.

A representative in the South Caucasus region for Human Rights Watch, Giorgi Gogia, told VOA that the government of Georgia must not cooperate in the extradition or repatriation of anyone who faces “an imminent risk of ill-treatment and torture in his home country.”

Muxtarli “was seeking safety and had to flee [Azerbaijan] as a result of a government oppression,” Gogia said in a telephone interview with VOA Georgian. He called on Georgian authorities to immediately investigate the dissident’s disappearance and “ensure the safety of other activists who fled Azerbaijan.”

“It is clear that Georgia’s government is under pressure from the Azeri government,” Gogia said, but he added that authorities in Tbilisi were clearly obliged to take action to protect the dissident from harm, if possible.

Muxtarli himself told VOA Azeri a week ago that he was concerned after learning that Georgian intelligence offices had been quietly approaching Azeri expatriates and dissidents and “recommending” that they leave Georgia and return home.

Georgian authorities had no comment on Muxtarli’s recent remarks, on Tuesday’s report from Sadigov in Baku, or on Mustafayeva’s complaints, but they are understood to have said that there was no legal justification for any detention or arrest of Muxtarli. Local police in Tbilisi have told Mustafayeva they are investigating the possibility that he was kidnapped.

This week’s developments follow a report by a pro-government website in Azerbaijan denouncing dissidents based in Tbilisi for carrying out “underground anti-Azerbaijani activities.”

Muxtarli and Mustafayeva have lived in Georgia for three years, since Mustafayeva began graduate studies in journalism at the Georgian Institute of Public Affairs (GIPA), an institution known for training future generations of civil servants and media professionals. They collaborated on a series of investigative reports disclosing alleged corrupt activities in their homeland, which was published by Meydan TV, a Berlin-based group founded by dissident blogger and former political prisoner Emin Mill.

The husband-and-wife team focused their journalistic efforts on the family of Azerbaijan’s President Aliyev, who has ruled his country since 2003 and has steadily consolidated his power, such as in February of this year, when he named his wife the country’s first vice president.

President Aliyev’s father, Heydar Aliyev, had ruled Azerbaijan as a communist when it was a republic of the Soviet Union; he lost power for a time then returned to control after independence arrived when the USSR broke apart in 1991. The younger Aliyev, who had been in charge of the state oil company, ran for and won the presidency after his father stepped down due to ill health in 2003, several months before his death.

The recent Azerbaijani accusation of “underground” activities by dissidents operating out of Tbilisi cited the arrest on May 25 of a senior official in an opposition party led by one of the Aliyev family’s longtime political foes, Abulfaz Elchibey.

Goze Bayramli, a deputy chairwoman of the Popular Front Party of Azerbaijan, was detained while returning from a trip to Georgia and accused of smuggling into Azerbaijan $12,000 in U.S. currency that she had not declared to customs inspectors.

Muxtarli shared his fears about future developments with his friends in Tbilisi. “He was worried especially after the arrest of Bayramli and an extradition case involving a Turkish citizen,” said Dave Bloss, a Tbilisi-based investigative journalist who taught Mustafayeva at GIPA.

Muxtarli’s wife said she is deeply concerned about her husband’s health and about what he might face in Baku. “Journalists are killed – or in the best cases, tortured,” Mustafayeva said. “That’s why we fled Baku.” She told VOA she holds the governments of both Azerbaijan and Georgia responsible for her husband’s abduction.