Australia announced Tuesday it has temporarily suspended airstrikes by its forces in Syria.

The move comes days after a U.S. fighter jet shot down a Syrian jet, and Syrian ally Russia responded by threatening to treat planes from a U.S.-led coalition operating in the skies over Syria as targets.

Australia is part of the coalition that began airstrikes against Islamic State targets in Syria in September 2014.

A statement from Australia’s Defense Ministry said it would monitor the “air situation in Syria” and make a decision on resuming airstrikes there “in due course.” The ministry said strikes in neighboring Iraq, also part of the U.S.-led coalition campaign, will go on.

The U.S. responded forcefully Monday to the Russian threat.

“We’re going to do what we can to protect our interests,” White House spokesman Sean Spicer told reporters Monday, defending the decision to shoot down a Syrian SU-22 jet that had bombed coalition partnered forces near the Syrian town of Tabqah.

“The Syrian regime … needs to understand that we will keep the right of self-defense of coalition forces aligned against ISIS,” he said. The spokesman made clear, however, that the United States would continue to “work with partners” to counter the threat of the Islamic State in Syria.

Russia’s Deputy Foreign Minister Sergei Ryabkov called the shoot down an “act of aggression.” A ministry statement issued in Moscow warned that coalition planes would be viewed as targets, and said a hotline for preventing accidental military engagement would be shut off.

Spicer said Monday that Washington would work to keep lines of communication open to, in his words, “de-conflict potential issues.”

Earlier, General Joseph Dunford, chairman of the U.S. Joint Chiefs of Staff, said officials are trying to re-establish the communications link to prevent potentially deadly accidents, and that the de-confliction efforts have worked well in the past. 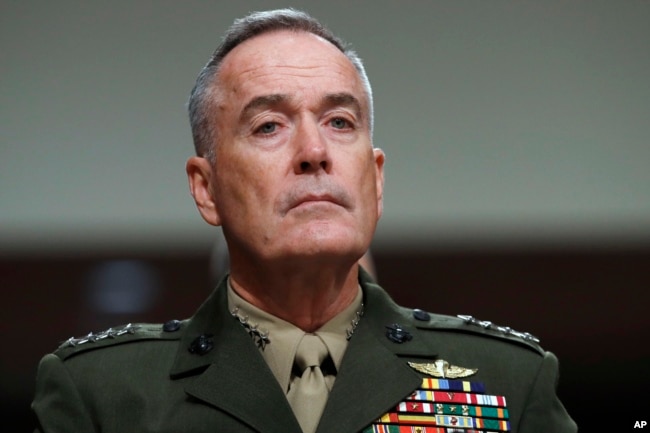 “The Russian Federation has indicated that their purpose in Syria, like ours, is to defeat ISIS,” Dunford told reporters. “And we’ll see if that’s true here in the coming hours, because all of our operations in and around Raqqa and southern Syria are designed specifically to get after ISIS.

“We have agreed in the past, that is we and the Russian Federation pro-regime forces, that operations that the coalition were conducting in Syria were effectively degrading ISIS capability, and will work to restore that de-confliction chain in the next few hours,” Dunford said.

The Russian military alleged that in Sunday’s incident, “the command of the coalition forces did not use the established communication channel for preventing incidents in Syrian airspace.”

Frants Klintsevich, deputy head of the defense committee in Russia’s upper house of parliament, said the defense ministry statement does not mean there will be war with the U.S. in Syria, but rather that Moscow will not accept attacks on its Syrian allies.

Earlier, Syrian forces attacked coalition fighters in Ja’Din, wounding a number of fighters and driving them from the town. Coalition aircraft stopped the pro-regime forces from advancing on Ja’Din.

The coalition said it contacted Russian commanders to set up a “de-confliction line” to prevent the fighting from worsening.

The dispute over the Syrian attack on the U.S.-backed fighters and the American response came as Iran launched ballistic missiles at Islamic State strongholds in eastern Syria in retaliation for a pair of attacks by extremists in Tehran earlier this month that killed 17 people.