As the coronavirus spreads across the globe, it is becoming increasingly difficult to nail down the global effects of the virus and the associated economic disruptions. This report uses a simple framework to assess supply and demand-side risks in a global pandemic scenario, in which cases of the coronavirus grow exponentially for the next several weeks, for a range of both advanced and emerging economies.

Our analysis suggests that Switzerland and the Eurozone may be among the most economically exposed advanced nations to a global pandemic scenario, while Korea and Singapore look to be relatively more exposed than most other emerging economies.1 In contrast, the U.S. economy and emerging economies in Latin America seem to have relatively less exposure.

It is becoming increasingly difficult to ascertain the extent to which the coronavirus is spreading across the globe, as clusters of new cases seem to emerge in various countries every day. Growth projections for certain economies can become outdated within a matter of seconds as new cases are confirmed. Accordingly, we are taking a slightly different approach in this report, as we ask the question: if this becomes a truly global pandemic, in which all of the world’s major economies see a sharp rise in cases and all the economic effects associated with that (reduced tourism, stoppages of work, supply chain disruptions, etc.), what economies will be most at risk? In a sense, we want to determine which of the world’s largest economies are most exposed to the broader global economy as a whole.

Our approach is relatively straightforward, as we lean on just two indicators to assess economic risks in a global pandemic scenario. The first indicator attempts to quantify supply risks by looking at the percent of each country’s imports represented by intermediate inputs used in the production process. The other indicator is more demand-focused: a measure of the extent to which a country’s domestic value added depends on foreign final demand. In our view, the more reliant a country is on foreign final demand and/or imported inputs in its production process, the more exposed that country is to a global pandemic scenario.

COVID-19 Is Both a Supply Shock…

Much of the focus on coronavirus thus far has been on the extent to which the outbreak disrupts supply chains, and we tend to agree that it is in fact a significant supply disruptor. Labor supply is one clear area of disruption, as infected workers may be forced to stay home, while school closures may also force some individuals to avoid working if they do not have access to child care. Meanwhile, when factories close, they are unable to supply producers further along the chain, as we saw in the early days and weeks of the initial outbreak in China, and as we are continuing to see today. 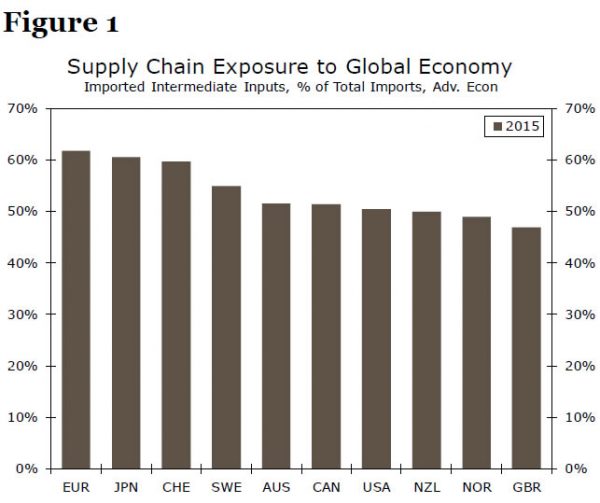 The measure we use in this report to quantify supply chain risks is imported intermediate inputs as a share of total imports.2 The idea here is that countries with supply chains that are more reliant on imported inputs, as opposed to inputs that are sourced domestically, are more at risk in a global pandemic scenario. We recognize that even those countries with relatively little reliance on imported inputs can still have a significant domestic coronavirus outbreak that derails production, but we still think our measure of choice is useful in providing some context for crosscountry supply risk comparisons. This metric is shown in Figures 1 and 2 for a range of both advanced and emerging economies. 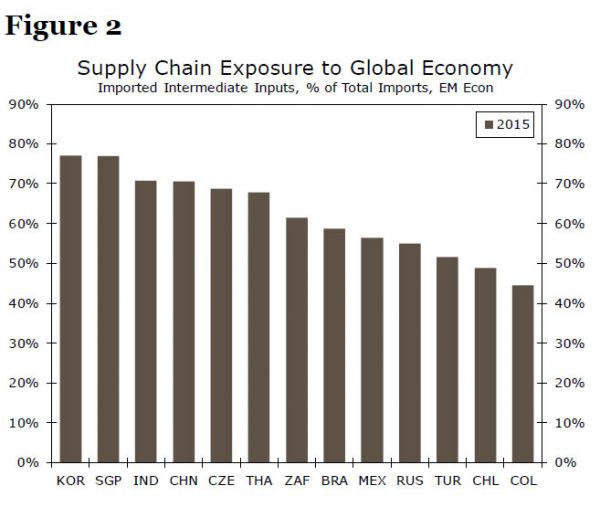 Looking first at the advanced economies, the Eurozone tops the list in terms of global supply chain exposure, which may in part reflect outsized intra-Eurozone supply chain exposure (i.e., Germany importing inputs from France). That is problematic for the region as a whole given more and more member nations are seeing clusters of outbreaks, but to be fair is not entirely reflective of true “global” (i.e., extra-Eurozone) risks. Japan and Switzerland are also at the top of the list, while the United States, Norway and the United Kingdom are among those advanced economies with relatively less global supply chain exposure.

However, if we take a step back, the gap between the advanced economy on our list with the most supply chain risk per our measure and that with the least supply chain risk is not all that large, suggesting this may not be the best metric for differentiating between large advanced nations in terms of their relative exposure to the virus supply shock.

There is, however, a more significant gap among emerging economies when it comes to supply chain risks. Several emerging Asian economies, including Korea, Singapore and India, are heavily reliant on imported inputs, which account for roughly three-quarters of those countries’ total imports. China is also near the top of the list, suggesting it may have trouble ramping up production even as it contains cases of the virus domestically.

More isolated from global supply chain risks, at least by this measure, are some Latin American economies, such as Colombia and Chile, as well as Turkey and Russia. Latin America has seen a much smaller concentration of cases than other regions, and although that may in part reflect lower testing rates, it seems supply chains in some key regional economies may be less exposed to virus risks, at least for now.

…and a Demand Shock

In addition to the clear supply chain risks posed by the coronavirus, there are demand issues to be concerned about as well. Quantifying demand risks from the coronavirus is obviously challenging, but our goal is to measure the extent to which each economy is exposed to the rest of the world in a holistic sense. We measure this by looking at the share of a country’s value added (akin to GDP) that is attributable to foreign final domestic demand (i.e., final spending by foreign consumers, businesses and governments).

To be fair, this does not by any means capture all of the demand risks in a global pandemic scenario, many of which are domestic—for instance, consumers are likely to cut back on visits to restaurants, movie theaters and malls if there’s widespread fear of infection. Much will depend, of course, on the extent of outbreak in each country and how authorities respond. With that in mind, we still see value in proceeding with our analysis.

Our preferred measure of demand risks, foreign final demand as a percent of domestic value added, essentially measures the extent to which a country’s domestic activity is dependent on foreign demand. Among advanced economies, Switzerland is far and away the most globally exposed, which may in part reflect its status as a global banking center. In fairness, that activity may not be as significantly affected as traditional goods exports, but the number still looks relatively concerning.

Also concerning are Norway and Sweden, both of which rely heavily on goods exports (Norway in particular depends on oil exports), and look especially vulnerable to a global pandemic scenario. Meanwhile, the U.S. economy is the least exposed of the advanced economies by a relatively significant margin. Japan and Australia, despite their geographic proximity to the current epicenter of the virus, are also relatively less exposed to global economic demand as a whole. 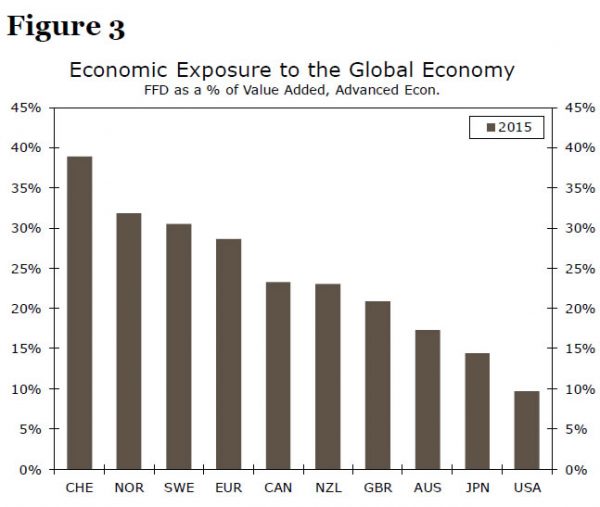 Among emerging economies, Singapore is the most globally exposed by a substantial margin, unsurprising given its status as a major intermediary in global trade flows (Figure 4). Other emerging Asian economies such as Thailand and Korea are also near the top of the list, albeit much less exposed than Singapore, while the Czech Republic also looks vulnerable—most of its exposure is to Germany.

Toward the bottom of the list are Latin American countries, including Brazil and Colombia, which as we noted in the prior section tend to be less exposed on the supply side. India and China are also relatively less exposed by this measure, which bodes well for China in particular if it can keep its own outbreak contained in the coming weeks as it spreads across the rest of the world. 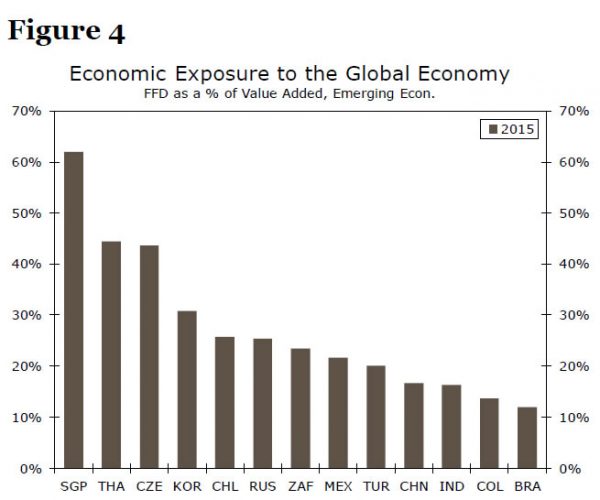 Taking both supply and demand factors into consideration, a few economies stand out as being particularly exposed, in our view. Among advanced economies, Switzerland is one of the most exposed to risks on both fronts based on our analysis, while the Eurozone also looks reasonably vulnerable. Among emerging economies, Singapore and Korea rank at or near the top in terms of supply and demand-side vulnerability, while the Czech Republic also looks fairly exposed. China and India, meanwhile, are highly exposed on the supply side but have relatively little demand-side exposure.

Among the countries that have relatively less exposure to a global pandemic based on our metrics, the United States stands out among advanced economies, particularly on the demand side. Meanwhile, Colombia, Turkey and Mexico are among the least exposed on both supply and demand metrics, while in general we note that the Latin American region as a whole seems to have relatively less exposure, particularly compared to emerging Asia.

1 The IMF classifies Korea, Singapore and Czech Republic as developed, not emerging economies, but we classify economies in this report based on the developed/emerging classification of their currency instead, as this was originally a currency-focused report adapted into an economically-focused report.

2 Given the complexity of constructing these data, figures are only available from the OECD through 2015.