Asia Braces for Rising Protectionism From US, Europe

Asia Braces for Rising Protectionism From US, Europe

Export dependent countries in Asia are growing increasingly concerned that the growing populist anger in the U.S. and Europe against perceived unfair trade policies could lead to a global economic slowdown.

“Rising protectionism could throw sand in the wheels of the global trading system and so start to gum it up,” said Frederic Neumann, a managing director of the HSBC Bank’s Asian economics research in Hong Kong.

Voter frustration with the job losses in industrialized countries due to globalization and free trade policies have been prominent issues in both the recent Brexit vote in Britain to leave the European Union and the U.S. presidential election.

The major East Asian economies reacted with short-term economic stabilizing measures to the market volatility ignited by the Brexit vote. South Korea ordered increased government spending. China adjusted the value of its currency and Tokyo said it is considering similar measures if the value of the Japanese yen continues to rise.

Reaction in Asia, however, to the heated protectionist sentiment being promoted in the West, especially in the U.S. during the presidential campaign, has been somewhat muted.

Peter Drysdale, who heads the East Asian Bureau of Economic Research at the Australian National University’s Crawford School of Public Policy says anxiety in Asia is tempered by the perception that a more rational economic discourse will prevail over time.

“The rhetoric coming out of the political campaign in the United States of course does disturb policy leaders elsewhere in the world including in Asia, although there they are sensibly quite aware that that rhetoric doesn’t necessarily translate into policy after the election,” Drysdale said.

This week he called for renegotiating or scrapping the North American Free Trade Agreement (NAFTA) with Canada and Mexico, and reiterated his opposition to the pending Trans-Pacific Partnership (TPP) that includes the United States and 11 other Pacific Rim countries. 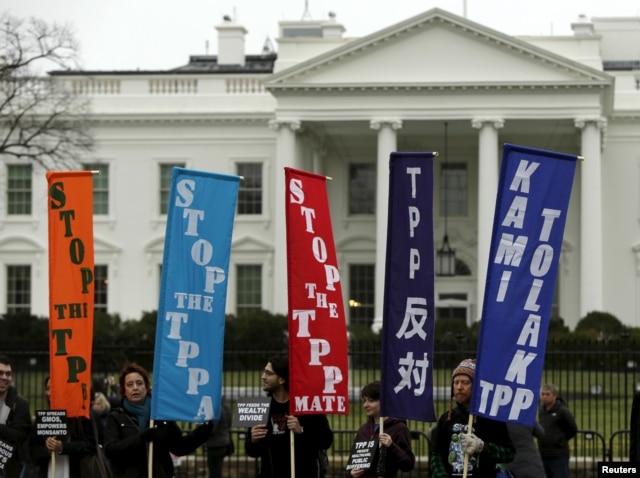 The Democratic Party presumptive nominee for president Hillary Clinton also came out against the TPP during the nomination campaign.

But she has a pro-trade history.  As first lady of the United States in the 1990s, she spoke in favor of the NAFTA deal that her husband, former president Bill Clinton, signed into law.

When she was President Barack Obama’s secretary of state, she spoke in favor of TPP, calling it the gold standard of trade deals.

As candidate she came out against the agreement, saying the final version was not a good deal for American workers.

But her conversion on globalization and trade was also seen as a political move to counter growing popular support for her socialist rival for the Democratic nomination, Bernie Sanders, who is a vocal advocate for more protectionist policies.

Even though both major presidential candidates are opposed to TPP, President Obama is still hopeful it will get ratified. He is expected to try to push the measure through the lame duck session of Congress after the November election, but before newly elected officials take office.

“Hope remains that calmer heads prevail after the elections and we get some sort deal being put through, but at the moment it looks very challenging indeed,” said Neumann.

Economists say Asian countries can take further measures to open up their economies and increase investment in industrialized countries to mitigate protectionist fervor in the West. Drysdale said that is already happening to some degree.

“Investors in India and China and elsewhere in the region are looking to put plants and investment into industrial countries and the United States in particular,” he said. FILE – India’s Prime Minister Narendra Modi speaks during the inauguration ceremony of the ‘Make In India’ week in Mumbai, Feb. 13, 2016.

Neumann said Trump has a point in that many American companies complain of complex bureaucratic regulations blocking market access to Korea, despite the FTA.

“There is a bilateral agreement between Korea and the United States. In theory most of the sectors should be open.  What we find in practice though is that often the relationship is a little bit imbalanced,” he said.

Officials in Seoul acknowledge it currently holds a $10 billion trade surplus with the U.S., but argues that South Korean companies are investing more in America than in the U.S. is investing in Korea.

If cooler heads do not prevail and major trade barriers are erected to severely constrain the interconnected global trading system, these analysts say, it would be a disaster for both East and West.

Brexit: No amicable divorce, but it never was a love affair anyway

Brexit: No amicable divorce, but it never was a love affair anyway