The 2018 ASEAN Summit had posed a valid question with regard to the compatibility between ASEAN centrality and the Indo-Pacific concept. ASEAN addressed this impending question through its approach paper on the Indo-Pacific. However, the question remains that whether ASEAN can remain central to the Indo-Pacific or would address regional issues in routine manner which have become victim of ASEAN norms without any strong recourse to regional mechanisms related to security.

ASEAN policy of consensus building has made ASEAN more predictable in terms of its yearly communique and discussions. During the last three years ASEAN Communiqué have outlined lofty ideals and impressive blueprint for future but the core security issues have been sidelined or accorded with a low priority listing, in the face of bon homie between ASEAN member states and dialogue partners. The fault lines on major economic issues, South China Sea, environmental problems such as Indonesian haze and the template for industrial revolution 4.0 needs better focus and strategy along with new ideas and compatible processes.

ASEAN strategy on the efficacy of Indo-Pacific manifests itself in the document which highlights that ‘ASEAN centrality as the underlying principle for promoting cooperation in the Indo-Pacific region, with ASEAN-led mechanisms, such as the East Asia Summit (EAS), as platforms for dialogue and implementation of the Indo–Pacific idea, while preserving their formats’.

‘No Reason to Negotiate’ With Beijing on South China Sea

Pressures increasing on Indonesia and Malaysia in South China Sea 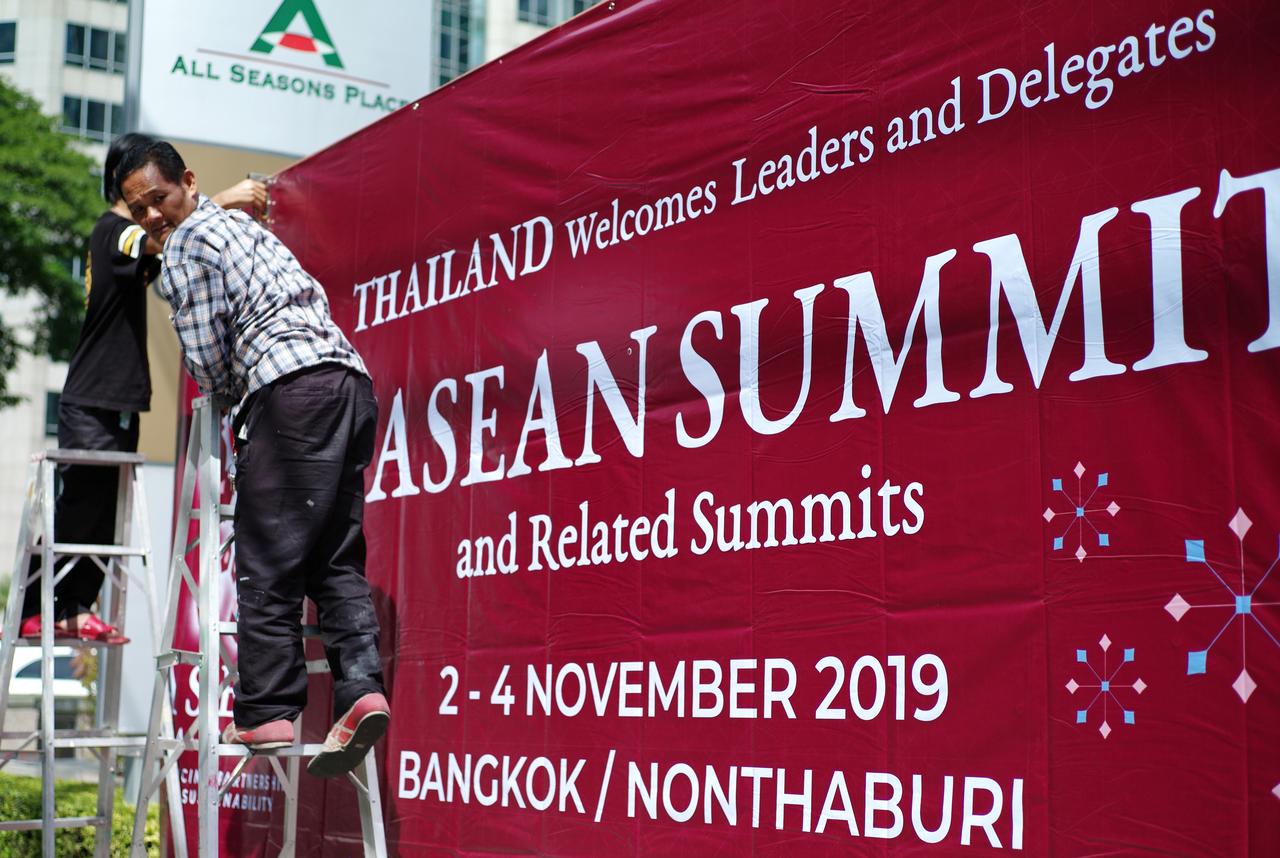 The dichotomy with regard to ASEAN position is that Indo-Pacific is more of a strategic and regional security construct. The subscribers of Indo-Pacific are not very accommodating towards China in the architecture despite the fact that few dialogue partners have expounded the need for the construct to be inclusive. The long drawn US-China trade war and the barb of words on the increasing Chinese assertiveness in South China Sea have made matters more complicated.

Further, Vietnam has been highlighting the Chinese bullying tactics in Vanguard bank and also its repeated foreign ministry briefings have stressed that China is trying to make non-disputed zones as contentious zones. Over a period of time, it is expected that US and Vietnam might enter strategic partnership agreement with defence and security cooperation as a priority. This would jeopardize Chinese designs in South China Sea and also bring the Eagle closer to the Dragon’s chest.

The incompatibility between ASEAN centric approach in even regional security apparatus envisaged under Indo-Pacific is a concern. ASEAN has imposed the recurrent and repeated thoughts of Indo-Pacific as inclusive zone and a zone for promoting interconnectedness and dialogue between partners. ASEAN position is understood in terms of maintaining its relevance but it must recognize the fact that Indo-Pacific was not an ASEAN process to serve its interests.

The dialogue partners’ interests are involved and they might or might not accept ASEAN diktats on the subject. In that case ASEAN would be seen as the fog horn without much contribution to larger security issues. The synergies envisaged between ASEAN and Indo-Pacific is flawed because ASEAN as an institution has failed in terms of providing maritime security but has been successful in information sharing through institutional mechanisms.

Given the limited naval capacities that most of the ASEAN members have, with the exception of Singapore, the efforts for regional maritime security needs a better approach. The naval and maritime security cooperation under ASEAN needs better coordination with dialogue partners and structural support.

The ASEAN summit meeting 2019 might have to address the following issues in a more focused way rather than template responses which now anyone can anticipate. Firstly, it will have to make clear commitment among the members of maintaining the status quo and promising that the skirmishes between the ASEAN member states on South China Sea(SCS)should not be advantageous to China. China has been advocating negotiations through bilateral consultations, incrementally happening in this region.

Secondly, ASEAN will have to stop meting out step-motherly treatment to the interest of Vietnam because of the intrinsic Cold war apprehensions.

Thirdly, ASEAN must make a strong stance with regard to finalizing the draft Code of Conduct with China on terms acceptable to all the claimant parties rather than towing the Chinese instructions.

The consensus laden framework at times leads to constraining action in the regional organization. Lastly, the ASEAN members must institute a South China Sea high powered committee to bring about dialogue and also raise relevant issues of concern without any fear or favour.

It has been seen that the deployment of Chinese survey ship in Vanguard bank for long duration of time defies any logic with regard to any scientific experiments or serious survey. China has used the survey ship Haiyang Dizhi 8 as a decoy for its strategic military activities and the deployment of large coastguard and naval vessels are a testimony to it. The withdrawal of the survey ship just before the ASEAN summit shows that China does not want SCS to figure anywhere in the ASEAN Communique and thereby taking evasive measures.

Also, there is no guarantee that China would not return to the same area in future. The international community must take note of Chinese tactics and must issue a strong rebuttal. Mike Pence, US vice President speech (October 24) during a lecture at Wilson Center said, “…. make it clear to Beijing that no nation has a right to claim the maritime commons as territorial seas”. He accepted that, “the Chinese Coast Guard has tried to strong-arm Vietnam from drilling for oil and natural gas off of Vietnam’s own shores’’. It clearly shows that Chinese activities were illegal and were strong arm tactics, the signs of an irresponsible UN Security Council member.

Vietnam would also be joining as non-permanent member of Security Council in 2020, and therefore it is imperative for the country to raise the South China Sea issue at this important forum. Vietnam would also be assuming the ASEAN Chairmanship in 2020. It has been seen in the past chairmanship of 2010 that Vietnam has avoided larger discussion on South China Sea. This shortsightedness was detrimental to the interests of Vietnam due to which the South China Sea as a major security hot spot was avoided in subsequent ASEAN meetings.

Even in ADMM plus meeting this has to be raised and better rebuttal of Chinese action in Vanguard Bank is needed. China has already established the bilateral consultation mechanism with Malaysia on South China Sea, completely undermining the role and responsibility of ASEAN as a legitimate organization for such discussions.

This also forewarns that China might wean away other claimants from the South China Sea consultations, forcing Vietnam to protect its own interest in not so obliging ASEAN forum.  During this year ASEAN Summit Vietnam must do lobbying with dialogue partners as well as claimants to put South China Sea as a main point in the East Asia Summit discussion and also in 35th ASEAN Summit Communique. This would help getting necessary traction in international and regional media.

In conclusion, one might witness that in this ASEAN summit the resonance of ‘One ASEAN One Identity’, ASEAN Community, sustainable development partnership, marine pollution, haze, culture, strategic trust, defence cooperation, military medicine, cyber security, transnational crime, and industrial revolution 4.0 would be discussed. The ASEAN would have to identify its approach to evolve as the regional organization furthering the needs of the region and consolidating itself as one homogenous identity. Interestingly, the core values of ‘ASEAN way’ and consensus might get reflected in the communiqué under Thailand’s chairmanship.

However, much depends on Thailand’s priorities in highlighting issues and taking cognizance of the developments in economic cooperation, security and building strategic trust while keeping the ASEAN values intact. The biggest question is whether ASEAN is ready for its role in ASEAN 4.0. Vietnam would have to make assertive diplomatic approach and not a hesitant demeanor to protect its EEZ and territorial waters threatened by Chinese encroachments.

Australia suspended its extradition treaty with Hong Kong and offered an immigration pathway for residents fleeing the city, after several...