Protests were under way Saturday in more than 135 cities in the U.S. and abroad to demand an impartial investigation into possible collusion between President Donald Trump’s campaign and Russia to influence last year’s election in Trump’s favor.

The “March for Truth” protests were organized by a national coalition of 17 activist groups, including the Women’s March and the Progressive Democrats of America.

The coalition is demanding the establishment of an independent commission to oversee an impartial probe and that ongoing congressional investigations be “properly resourced and free of partisan interests.”

There are four congressional investigations of possible Trump campaign links to Russia and Moscow’s meddling in the election. In addition, the Justice Department appointed former FBI Director Robert Mueller as a special counsel to probe whether Trump campaign aides illegally colluded with Russia.

Trump has rejected allegations of collusion and dismissed the U.S. intelligence community’s assessment that Putin ordered an influence campaign aimed at disrupting the November election. Putin has repeated there is no evidence of Kremlin involvement in the election. 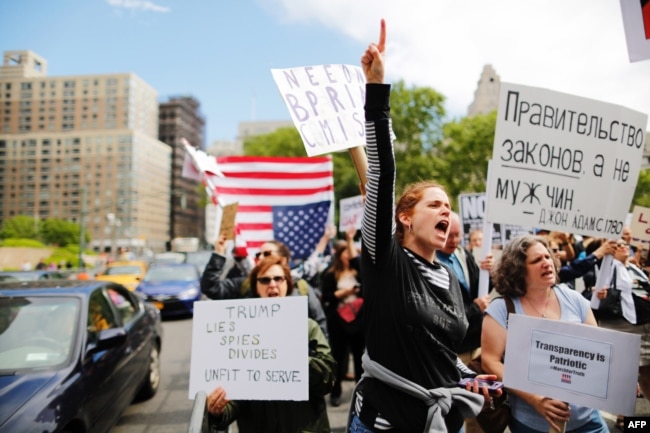 Demonstrators take part in an anti-Trump “March for Truth” rally at Foley Square on June 3, 2017 in New York City.

“March for Truth” organizers are also demanding that Trump release his personal tax returns. Trump has repeatedly refused to disclose them, raising the ire of critics who contend his refusal leaves citizens without information regarding his potential conflicts of interest or how his proposed tax policy overhaul may help enrich himself. There is no law compelling a U.S. president to release tax returns.

The “March for Truth” is the latest in a number of weekend anti-Trump protests since his election, including the Women’s March in January and the March for Science in April.

Supporters of the president also took to the streets Saturday. A “Pittsburgh, not Paris” rally is being held in Lafayette Square across from the White House in celebration of the U.S. withdrawal from the Paris climate accord.

“As you know, the president has been under siege from the mainstream media and the Democrats, especially now that he put American jobs first by withdrawing from the Paris accord,” reads an invitation to the rally issued by the president’s campaign. “Therefore, we are organizing a group to demonstrate our support for President Trump and his fearless leadership,” it added.

Trump announced Thursday his decision to pull out of the global climate agreement, joining Syria and Nicaragua as the only countries that are not part of the Paris agreement.

Militants Drive Van Into People on London Bridge, Stab Others

Militants Drive Van Into People on London Bridge, Stab Others