Police said they arrested 27 people Saturday in a day of protests in Boston, Massachusetts, where an estimated 40,000 people gathered, a week after a march by white supremacists in Charlottesville, Virginia, resulted in three deaths.

Police Commissioner William Evans said the 27 people were arrested for charges that included assault and battery on police officers. Three people were wearing ballistic vests, and one of those was armed, the commissioner said.

The arrests came after a free-speech rally had ended and counterprotesters began dispersing, flooding the streets near the Boston Common. News video showed officers in riot gear clashing with counterprotesters as the officers attempted to herd them in one direction.

A VOA reporter said guests at her hotel were asked at one point to stay inside because of protesters filling the surrounding Washington and Tremont streets. The reporter could see about 100 protesters from her window, chanting “our streets.”

The thousands of leftist activists marching Saturday heavily outnumbered those attending the free-speech rally featuring right-wing speakers, which was scheduled in July by a group calling itself Boston Free Speech.

John Medlar, one of the group’s organizers, told multiple media outlets the rally would not welcome white supremacists, and he has denounced racist groups such as the Ku Klux Klan.

“We absolutely denounce the KKK, neo-Nazis, ID Evropa, Vanguard — all these legit hate groups. We have nothing to do with them and we don’t want them here,” Medlar told the NBC-TV affiliate in Boston.

Boston granted a permit for the free-speech rally to be held in a downtown park from noon to 2 p.m. EDT, with a maximum of 100 people, though far fewer people showed up. The rally dispersed about 1:30 p.m.

Despite the group’s rejection of white supremacists, ANSWER Coalition Boston, a local chapter of the Black Lives Matter movement, planned a counterdemonstration, which it dubbed “Fight Supremacy,” to oppose the free-speech rally. 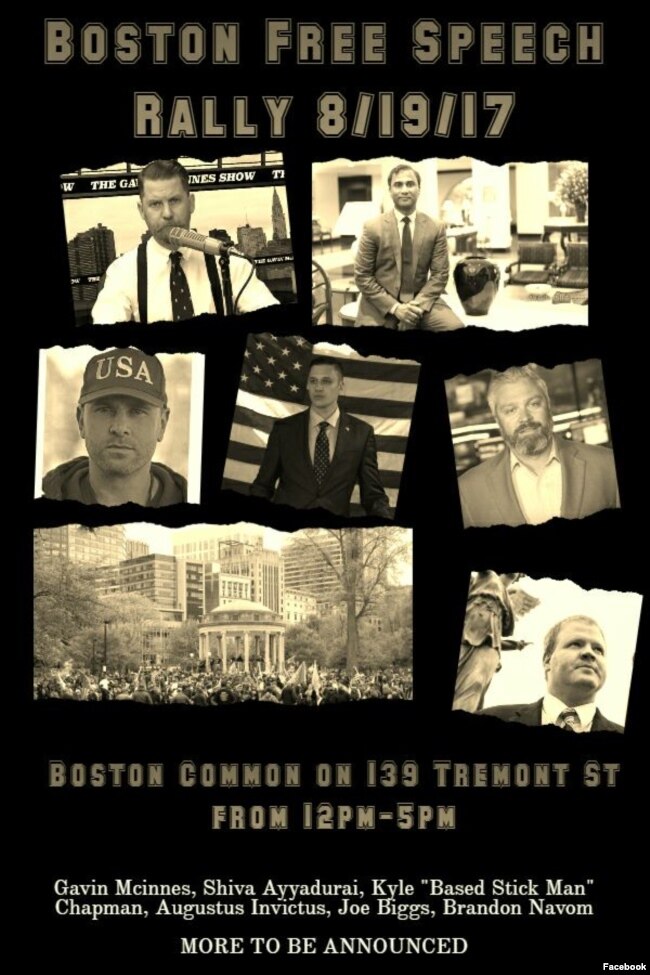 A poster promoting the Aug. 19, 2017 Boston Free Speech rally that was posted to the group’s Facebook page.

Boston officials put a plan in place to handle the dueling rallies in order to avoid the violence seen last weekend in Charlottesville, which left one woman dead after a white nationalist protester allegedly drove his car into a group of counterprotesters.

President Donald Trump noted the incident on Twitter and commended police officers for their handling of the situation.

Prior to the event, Boston Mayor Marty Walsh said more than 500 police officers would be on hand to keep the peace, and certain items were to be banned from the protest site.

“No weapons, no backpacks, no sticks,” Walsh said. “We are going to have a zero-tolerance policy. If anyone gets out of control — at all — it will be shut down.”

Protests were also held elsewhere across the U.S., including in Austin and Houston, Texas; Durham, North Carolina; and Laguna Beach and Venice, California.