10 Missing After US Destroyer Collides with Tanker

10 Missing After US Destroyer Collides with Tanker

Ten American sailors are reported missing and five injured after the U.S. Navy destroyer USS John S. McCain collided with a merchant ship east of Singapore, near the Strait of Malacca.

U.S. 7th Fleet said in a statement early Monday that the guided-missile destroyer collided with the Liberian-flagged tanker ship Alnic MC at about 6:20 a.m. local time. The McCain was headed to Singapore for a routine port visit at the time of the incident.

The McCain sustained “significant damage” to its hull, but arrived hours later under its own power at Singapore’s Changi Naval Base. 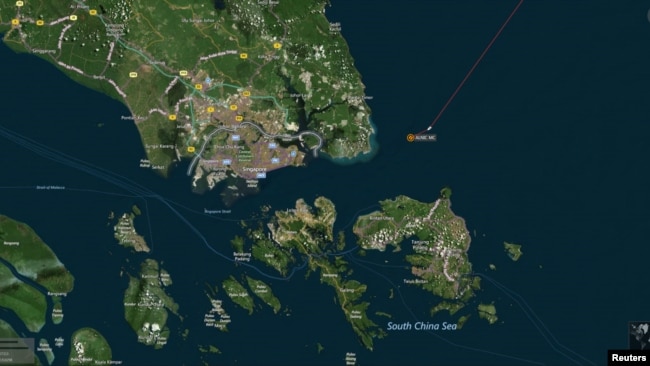 A map shows the location where the Alnic MC merchant vessel came to a halt after a collision with the guided-missile destroyer USS John S. McCain east of Singapore August 21, 2017.

Singapore’s Maritime and Port Authority said the Alnic also sustained damage, but that there were no injures among its crew.

A Singapore Navy helicopter took four of the injured U.S. sailors to a hospital in Singapore for treatment of non-life threatening injuries.The U.S. 7th Fleet said the other injured sailor does need further care.

Singapore’s Navy and Coast Guard are also assisting with search and rescue efforts.

President Donald Trump and Sen. John McCain both tweeted they were praying for the sailors aboard the naval vessel. The ship is named for McCain’s father and grandfather, who were both admirals.

Thoughts & prayers are w/ our @USNavy sailors aboard the #USSJohnSMcCain where search & rescue efforts are underway. https://t.co/DQU0zTRXNU

Cindy & I are keeping America’s sailors aboard the USS John S McCain in our prayers tonight – appreciate the work of search & rescue crews https://t.co/jzk9giXbfg

It is the second collision involving a ship from the Navy’s 7th Fleet in the Pacific in two months. Seven sailors died in June when the USS Fitzgerald and a container ship hit each other in waters off Japan.

The Fitzgerald’s captain was relieved of command and other sailors are to be punished after the Navy found poor seamanship and flaws in keeping watch contributed to the collision, the Navy said last week.

Freeport Indonesia Copper Mine Access to Resume After Clashes

Freeport Indonesia Copper Mine Access to Resume After Clashes

Teen activist Howey Ou fights for environmental change in China, her home and the world’s biggest polluter. The country,...